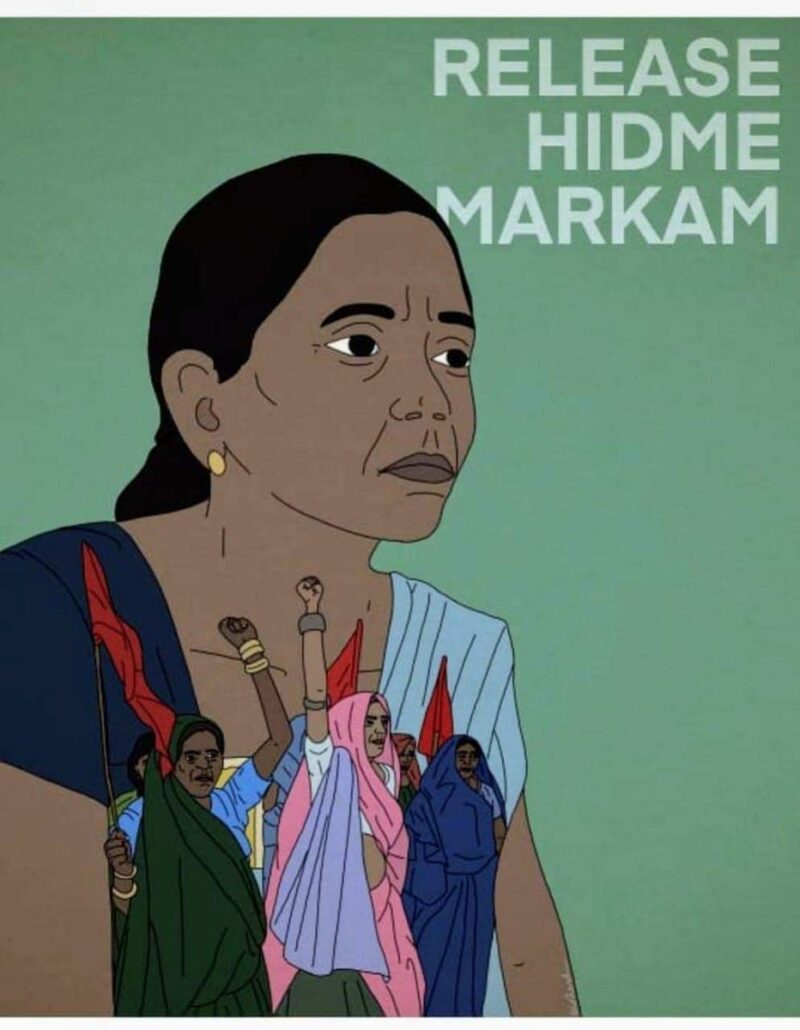 An Adivasi activist against corporate greed and state violence: A profile of Hidme Markam

Profiles of Dissent is a series centered on remarkable voices of dissent and courage across the world. They are writers, poets, activists, human rights defenders and those who have been incarcerated for speaking truth to power.

Sabah Gurmat is a Law student at the University of Delhi and a freelance journalist. She tweets @_sabahgurmat

A political prisoner is a person who is imprisoned for their belief. Regimes across the globe arrest people for who they are and not for what they have done, thus making the category of the political prisoner into a criminal offense. It is a thought crime: the crime of thinking, acting, speaking, probing, reporting, questioning, demanding rights and, more importantly, exercising citizenship. It is also a crime of existing in a Black, Brown, Muslim body that can be targeted and punished for who they are, or what they represent.

These inhumane incarcerations do not just target private acts of courage, they are bound together with the fundamental questions of citizenship, and with people’s capacity to hold the State accountable – especially States that are unilaterally and fundamentally remaking their relationship with their people.

The assault on the fundamental rights has been consistent and ongoing at a global level and rights-bearing citizens are transformed into subjects of a surveillance State.

A fearful, weak State silences the voice of dissent. Once it has established repression as a response to critique, it has only one way to go: to become a regime of authoritarian terror, a source of dread and fear for its citizens.

With Profiles of Dissent, The Polis Project works with individuals and organizations across the world to question and critique the State that has used legal means to crush dissent illegally and eliminate questioning voices.

It also intends to ground the idea that, despite the repression, voices of resistance continue to emerge every day.

Hidme Markam, 28, is an Adivasi anti-mining activist and human rights defender, who served as a convener for the Jail Bandi Rihai Manch (JBRM – Committee for the Release of Prisoners), a platform working on the documentation and release of Adivasi prisoners primarily incarcerated under charges of Naxalism. Markam is part of the Gond tribe and Burgum, her village in Chhattisgarh’s conflict-ridden Dantewada district, has no schools.

Growing up in a militarized region, Hidme Markam became the primary care-giver and provider for her family at a young age. “When our father died in 2008, Hidme was the one who gathered the courage and helped educate us,” said Bajni, Markam’s youngest sister. Despite never having access to formal education herself, from 2014 onwards Markam started working as a mid-day meal scheme cook in a public school to help her younger sisters, Hiteshwari and Bajni, to complete their education.

Two years later, Markam quit her job for full-time social work. Even as the Chhattisgarh Police now claims that she was affiliated to Maoist groups, Markam’s sister Hiteshwari refutes those allegations. “My sister didn’t even want to get married as she worked for the rights of women and Adivasis. She is a social-worker and wasn’t doing anything else! I am also involved with the Swasthya Vibhag (government health department). We are merely doing social work for people’s welfare,” Hiteshwari Markam said.

Over the past few years, Markam’s work as an activist has included organizing anti-mining protests, mobilizing against state brutalities on Adivasi women and campaigning for the release of Adivasis languishing in jails on spurious charges. As a staunch civil liberties campaigner, Markam set up the JBRM along with noted human rights defenders Soni Sori and Sujit Karma. After the Congress government came to power in Chhattisgarh, the Patnaik Committee was created in 2019 under the aegis of retired Supreme Court judge Justice A.K. Patnaik. The Committee’s goal included reviewing cases against approximately 23,000 Adivasis, 6,743 of whom are held as undertrials across Chhattisgarh’s jails. Since the Committee’s inception, JBRM provided key inputs and reports highlighted how the JBRM managed to collect information on more than 100 prisoners.

Several colleagues praised Markam’s community mobilizing efforts. Rinchin, an activist with the Chhattisgarh Mahila Adhikar Manch and the People’s Union for Civil Liberties (PUCL), highlighted the importance of Markam’s work against the mining giant Adani corporation. As part of the Nandraj Pahad (mountains) movement in 2019, Markam led a week-long protest to oppose Adani’s mining work in the state’s iron rich Bailadila Hill region. Local inhabitants see the mountains as a sacred space and have resisted corporations’ attempts to clear off the region’s forests. Locals exposed how fake resolutions were passed by gram sabhas (village councils) to give the impression that the majority of villagers had consented to the mining. An independent probe conducted in 2020 confirmed the protestors’ accusations. “Some of the local Adivasis who resisted the corporations were killed and others have been jailed. Hidme played a key role in mobilizing the locals to protest against illegal mining,” says Rinchin.

On 8-9 March 2021, Hidme Markam participated in a two-day long International Women’s Day program organized in the village of Sameli to commemorate Adivasi women who had been victims of state violence. The program focused on the custodial killing of Pande Kowasi, a young Adivasi woman who had been incarcerated on charges of Maoism. Kowasi’s family rejected the Police allegations that she died by suicide in prison. The people of Sameli had also earlier witnessed Nande’s rape and suicide — an Adivasi teen, who was raped and found lying unconscious near a canal and later died by suicide after her calls for justice went unheard. Her family claimed that she was raped by security forces, but the Police trampled all attempts at a fair investigation. According to Rinchin, Markam coordinated the realization of a mural dedicated to Nande, which was later removed by the Police to prevent locals from remembering her struggle.

During the event on 9 March, Markam was dragged into an SUV by the Police. Jail Bandi Rihai Manch’s Sujit Karma, who was present at the time of arrest, said that it was designed to “send a message to the locals, to instill fear and have a chilling effect on them.” Soon after her arrest, the Police press release confused her identity with that of an alleged Maoist named Hidme Kawasi. Markam’s family observed that some of the charges named one Hidme Kawasi, but the Police implicated Markam based on the same first name. Across Chhattisgarh’s Bastar region, state authorities repeatedly conflate identities of Adivasis. Numerous people have been jailed for merely sharing a first name with suspected Maoists, despite having different surnames.

Charges: The Police registered five First Information Reports (7/2016, 9/2016, 7/2017, 17/2019 and 3/2020) against Hidme Markam. In the initial press release issued under the name of Hidme Kawasi, the Police accused Markam of being a Maoist and put a bounty of Rs. 100,000 on her. Charges against her include sections under the non bailable Unlawful Activities (Prevention) Act, Sections 302 and 307 of the Indian Penal Code (murder and attempt to murder) along with numerous other sections under the Indian Penal Code, Arms Act and Explosives Act.

Update: Hidme Markam is currently lodged in Jagdalpur Central Prison, as the second surge of COVID-19 put court hearings on hold. Since the time of her arrest, the Police have not yet filed any charge sheet. Markam was allowed to meet her family and colleagues a couple of times since the arrest, but she reported being forced to sign various legal documents in the absence of her lawyers. Various civil-society and international human rights groups have demanded her release stressing how Adivasi women in Chhattisgarh’s conflict zone have historically been targeted by both state and corporate violence using false charges.

Even if men like Adani try to open their mining activities here, we shall resist. Silence is not our option. An excerpt of Hidme Markam’s speech at the online seminar Rape, Resistance and the Road to Justice organized by Women against Sexual Violence and State Repression in November 2020:

In the [paramilitary] camp at Potali, we came together and resisted. After the paramilitary camp was set up, we [Adivasi women] faced the worst of brutalities. They set up camps on our agricultural land, the land meant for our cultivation purposes, and once they do so, we are unable to do anything. It is us, the Adivasis, who own this land and by setting their base here, a lot of exploitation occurs. Our women are no longer able to go to jungles, no longer able to work on our own fields and cultivable lands.

These camps are not for our safety or security, these are simply ways to seize possession of our lands and then donate it to big corporations. We, the rightful owners of our lands, are forced to bend before these corporate houses. Despite setting up so many camps, they haven’t been able to show us a single concrete thing that has given us Adivasi women safety.

We are resisting these camps because they are not meant for our security! Rather, they have been terrorizing our women, using these to commit atrocities and rapes. The idea of a “security” camp should be that our women would be living fearlessly, but instead after the institution of these camps, we live in fear. These men are not here for our safety.

With respect to Nandraj Pahad (Mountains), last year we had a seven-day long andolan (protest-movement) wherein all the gram sabhas (village councils) were found to be fake and later again in an independent investigation this was found fake. The Nandraj Pahad has been a deity for our ancestors, but the State has always sided with the big companies that seek to do mining there, they have never taken our side. We Adivasis living in jungles have preserved those mountains for so long. Amongst the Adivasis who fought for Nandraj Pahad, around five people were killed under the guise of Naxalism and six or seven locals of that area’s village, including the sarpanch, have been imprisoned. Those are our jungles, our mountains and yet it is we who are being killed, we who are being sent to jails, our sisters who are being raped.

Why is it that this government – just to give favors to corporations, just to snatch our mountains – is ready to commit such crimes on us? Whether it is the Congress government or the Bharatiya Janata Party (BJP) government or whatever the party in power – there has never been anything beneficial done for the average Adivasi’s life. Rather, from our blood to our bodies, in everything they have exploited us.

And no matter what the circumstances are, we will fight to save Nandraj Pahad. We shall fight till our last breath, till we are alive. We will not give our mountains, our lands. We shall not give this for mining. Even if men like Adani try to open their mining activities here, we shall resist; silence is not our option.