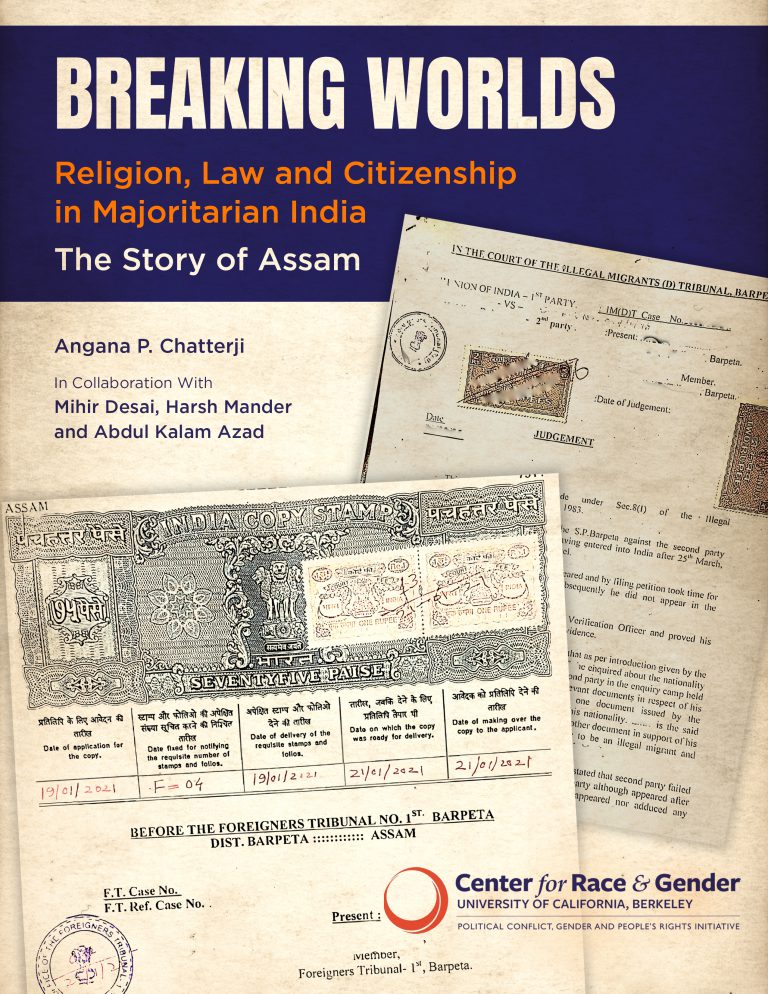 Angana P. Chatterji is Research Anthropologist and Founding Co-chair, Political Conflict, Gender and People’s Rights Initiative at the Center for Race and Gender at University of California, Berkeley. She tweets at @ChatterjiAngana

In this excerpt of Angana P. Chatterji’s chapter The citizenship experiment from her book Breaking worlds: Religion, law and citizenship in majoritarian India in collaboration with Mihir Desai, Harsh Mander and Abdul Kalam Azad, Chatterji examines the reality of “declared foreigners” in India following the State’s creation of the National Register of Citizens. She questions what this means in relation to the State’s power over the lives of minority communities in establishing an absolute nationalism.

Testimony of [REDACTED], Bangla-descent Muslim woman:[i] “I weep for the tragedy that has become our life. My [READACTED] did not die in peace. The NRC betrayed us. He felt like a criminal and exhausted from running around to clear his name. Then he got violently sick. He could not breathe. I do not know if it was the plague [COVID-19]. His last words were of the pain he felt, how desolate and shamed he felt being made into a ‘foreigner’ in his homeland. I am left to hold this in my heart forever.”

Where to, From Here?

On December 11, 2019, Prime Minister Modi had reportedly tweeted: “I want to assure my brothers and sisters of Assam that they have nothing to worry after the passing of #CAB.”[ii]

On February 25, 2021, Home Minister Amit Shah stated: “The biggest contribution of the Narendra Modi government at the Center is to establish peace in Assam, ensure development, give corruption-free administration, rid the state of agitations, and put the brakes on the entry of illegal immigrants.”[iii]

On August 10, 2021, it was reported that the Government of India had not taken a decision regarding the implementation of the NRC throughout India.[iv] However, it was reported that the Government of India will update the NPR during first phase of the Indian Census in 2021.[v] [vi] On August 17, 2021, the Government of Assam’s Home and Political Department issued a notification instructing that foreigners “Detention Centers” be termed “Transit Camps.” This action was probably undertaken to diminish, in some measure, the negative connotations associated with the term, “Detention Center.”[vii]

The fault lines of belonging in a majoritarian nation redefine religious minorities as national outcasts. Iniquitous citizenship processes catapult momentous consequences. The politics of deceit that governs the reconstitution of the precepts of citizenship are imperiling minority communities. The highly complex citizenship processes are further complicated by the systemic obscuring of decision-making and facts and figures, wherein misinformation has been posited as “fact” by officials with impunity. In Assam, the NRC and Foreigners Tribunals have commenced the political segregation of “national subjects” and rights-bearing citizens from “invaders” without rights. A disproportionate number of persons who are alleged to be “foreigners” and illegal persons” are Muslims. In particular, Bangla-descent Muslims, “Miya” Muslims, from marginalized social classes are the principal target. Many are women, children, and destitute persons. These policies also jeopardize their right to freedom of religion.[viii]

Political circumstances have pronounced targeted communities to be socially disposable, effecting conditions of social death.[ix]In seeking recourse to the state’s rulings against them, targeted individuals are faced with a towering uncertainty about what the future holds. Most live in imploding social worlds, and lack psychosocial support systems, information, and financial resources.[x] Impacted communities in Assam and their allies note that the militarization of governance wrought by the citizenship movement distracts from the political conflict that grips the BJP-governed state of Assam.[xi] While it will be practically impossible to put all those that are declared to be “foreigners” in detention camps, local communities fear that such camps in Assam will produce a new social order of forcibly separated families, broken communities, and forced labor.[xii]

Through making religion a priority for Indian citizenship in ways that privilege the majority community, the Government of India’s stated objective is to replicate “Assam-like” changes to citizenship across India. The NRC is proposed to be implemented across the country where thousands of tribunals are reportedly to be set up to detect, detain, intern, and deport “foreigners.”[xiii] If the corpus of laws and processes to regulate citizenship are applied across India, the citizenship rights of millions of people, disproportionately Muslims, may be in danger.[xiv] Countless may be held in prolonged or indefinite detention.

Many of those declared “foreigners” throughout India may constitute a mass of repeatedly displaced individuals and peoples without rights or legal protections. They may become the “nowhere people,” refugees in their own land, effectively forced out, expelled, exiled, and presumptively rendered stateless.[xv] Where will they go? How are citizenship operations in contemporary India analogous in spirit with earlier experimentations in divesting minority religious groups of belonging? No state in South Asia may be prepared to offer refuge to the deportees. This may lead to the indefinite detention of those deemed foreigners. How is such deprivation of citizenship rights in violation of international law?

It may be noted that the Myanmar military crafted a citizenship law in 1982, dismantling the citizenship rights of the Rohingya.[xvi] In hindsight, a study of the Nuremberg Laws instituted in Nazi Germany in September 1935 reveals the escalation through law of a process against minorities targeting their right to belong within a nation-state that culminated in genocide.

Thus far, the BJP has shown hesitancy[xvii] in nationalizing the “Assam experiment” across India. In Assam, non-Muslims (predominantly Hindus) are being granted access to citizenship on the very premise that denies rights to Muslims. The BJP’s objective of granting citizenship to “illegal” (undocumented) non-Muslim immigrants (because they are non-Muslim) poses both a legal challenge and a messaging conundrum. To achieve this unreserved rejection and exclusion of a community (Muslims) based on their faith would require a categorical contravention of India’s constitutional and juridical structure, recanting its democratic and historical obligations.

The state of exception[xviii] surged through the “citizenship experiment” in India makes the anomalous routine. The primary accused in the illiberal citizenship movement, Bangla-descent Muslims, “Miya” Muslims, are dispossessed of their citizenship rights, of their non-derogable rights to represent and defend themselves, and indeed of their power of agency over life. The “citizenship experiment” signals the physical and epistemic exclusion of Muslims from legitimate society. Exclusion is implicit within the structure of caste/oppression in India. This has been repeatedly manifested in the violent relation of dominant, caste-privileged Hindus to Adivasis (Chhattisgarh, Narmada Valley), Dalits (Rohith Vemula, gang-rape and murder of a Dalit girl in Tamil Nadu, 2016), Christians (Odisha 2007-08), Muslims (Ayodhya, Gujarat 2002), and Sikhs (1984). Exclusion and extreme xenophobia are fundamental to the non-recognition of the humanity of those who are vulnerable and subaltern in Indian society today. Such practices of ostracization and racialism have been prerequisite to fostering a sense of Hindu purity in designating Muslims as “enemy” (Kashmir) and “Other,” “outsider” (Assam).

In Assam, Hindu nationalists maneuver the exclusionary citizenship campaign for the consolidation of a majoritarian state. The amplification of the reach of state power over minority lives has propelled an unabating emergency wherein the Indian government has exceeded its authority. The Hindu nationalist state authorizes indignity, expulsion, and the prospective destruction of the “Muslim-Other,” as signified by the creation of detention camps in Assam. [xix] The rule of law is subverted through pervasive securitization  and an authoritarian arbitrariness that operates in the name of national well-being, spurring immense social and political violence and new forms of partition.[xx] As a political blueprint, the BJP’s exclusionary “citizenship experiment” signals an immoderate turn[xxi] [xxii] in Indian politics and polity that can enkindle upheaval across the entirety of South Asia. Local communities state that only the ground swell of principled civil society dissent and political transformation, together with global reaction and concerted international pressure, can halt the would-be erasure of Muslims in India and repudiate the onset of absolute nationalism.[xxiii]

[ii] Further, Mr. Modi continued: “I want to assure them – no one can take away your rights, unique identity and beautiful culture. It will continue to flourish and grow.” A second tweet followed: “The Central Government and I are totally committed to constitutionally safeguard the political, linguistic, cultural and land rights of the Assamese people as per the spirit of Clause 6.” “‘Nothing to Worry’: PM Modi Assures Assam on Citizenship Bill,” Hindustan Times, August 4, 2020, https://www.hindustantimes.com/india-news/no-one-can-take-away-your-rights-pm-modi-assures-assam-on-citizenship-bill/story-jRhLO5hbdTylvQUa0ldCeI.html; In January 2019, the RSS-backed student group Akhil Bharatiya Vidyarthi Parishad reportedly had significant presence and influence at 12 colleges in Guwahati. “ABVP Assam Unit Tries to Counter ‘Propaganda’ Against Citizen Bill,” The Telegraph, January 22, 2019, https://www.telegraphindia.com/north-east/abvp-assam-unit-tries-to-counter-propaganda-against-citizen-bill/cid/1682474.

[vii] Rokibuz Zaman, “Assam Renames Detention Centres As Transit Camps,” Times of India, August 20, 2021, http://timesofindia.indiatimes.com/articleshow/85469196.cms. An Indian Express editorial noted the ethnic violence in the northeast states of Assam, Meghalaya, Mizoram, and Nagaland, urging governments in the region to give up “emphasis on singular identities” and commit to inclusive politics. “Government Should Take Note of the Signals of Unease in Northeast States,” Indian Express, August 19, 2021, https://indianexpress.com/article/opinion/editorials/independence-day-shillong-cherishterfield-thangkhiew-7460380/

[xv] The already heightened social and legal discrimination faced by Muslims in India today places them at heightened risk of harm when their legal identity is in jeopardy. The habitual and structural inequalities that Muslims, and especially women, are confronted with in everyday life will be further exacerbated when their belonging is placed in question. Coequally, it is of note that in April 2021, the Supreme Court ruled it would not prevent the deportation of approximately 170 Rohingya refugees detained in Jammu, despite the International Court of Justice’s January 2020 order to Burma/Myanmar to safeguard Rohingya Muslims from genocide. Aakash Hassan, “‘Supreme Court has Signed Our Death Warrant’: Rohingya in India,” Al Jazeera, April 9, 2021, https://www.aljazeera.com/news/2021/4/9/supreme-court-has-signed-our-death-warrant-rohingya-in-india; British Broadcasting Corporation, “Myanmar Rohingya: Government Rejects ICJ Ruling,” January 23, 2020, https://www.bbc.com/news/world-asia-51229796; Also: International Court of Justice, “Application of the Convention on the Prevention and Punishment of the Crime of Genocide (The Gambia v. Myanmar),” January 23, 2020,” https://www.icj-cij.org/public/files/case-related/178/178-20200123-SUM-01-00-EN.pdf; Human Rights Watch, “Interview: Landmark World Court Order Protects Rohingya from Genocide,” January 27, 2020, https://www.hrw.org/news/2020/01/27/interview-landmark-world-court-order-protects-rohingya-genocide#; Prashant Bhushan and Cheryl D. Souza, “SC Ruling on Rohingya is Against India’s Commitments to International Law,” Indian Express, April 17, 2021, https://indianexpress.com/article/opinion/columns/supreme-court-ruling-rohingya-refugees-illegal-detention-7277019/.

[xvii] Shoaib Daniyal, “A Year Ago, The BJP Focused Its Politics on The CAA. So Why Hasn’t It Been Implemented Yet?” Scroll, December 11, 2020, https://scroll.in/article/980659/a-year-ago-the-bjp-focussed-its-politics-on-the-caa-so-why-hasnt-it-been-implemented-yet.

[xix] I thank Abdul JanMohamed for conversations on the subject.