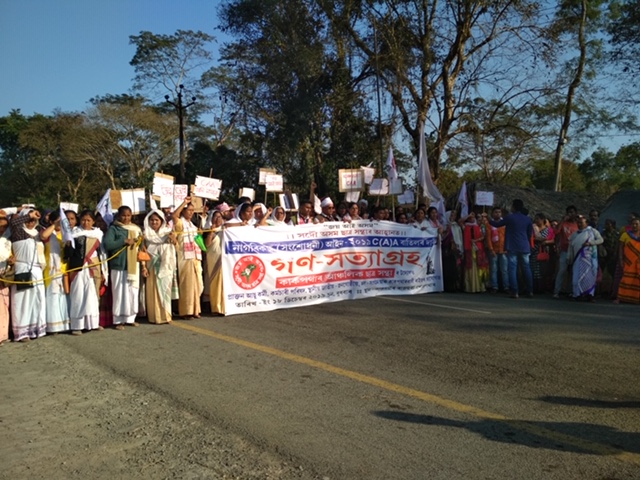 Assam: Anti-CAA protests and the silence of the media

Nazimuddin Siddique is an independent researcher based in Assam. He completed his Ph.D. in Sociology from Gauhati University, Assam.

Roshni Sengupta is a political scientist and Visiting Professor at the Jagiellonian University in Krakow, Poland. Email: [email protected]

As the news cycle shifted from full-time focus on anti-Citizenship (Amendment) Act (CAA) protests in India to the unprecedented state violence unleashed against students and protestors, the narrative moved conveniently away from the ground reality in Assam and the North East. Mainstream television– staying true to its godi media (lapdog media) epithet[1] – has failed to produce any significant reportage on the unfolding situation in Assam. The information blockade imposed on news filtering out of the State – similar to the situation in Kashmir – has made access to credible material exceedingly difficult. Needless to say, the cavalier attitude of the ‘national’ media towards the North East remains representative of what has been a lasting relationship of convenience. Coverage of issues emerging from the region has been sparse and perfunctory. At the time of writing this piece, the State of Assam has been in civil unrest mode since the passage of the Citizenship Amendment Bill (now an Act notified in the Gazetteer of India) in the Lok Sabha, with artists and intellectuals leading the way.

The passage of the CAA must be viewed against the backdrop of the exercise of National Register of Citizens (NRC), which was implemented as a flagship first in Assam. According to the Bharatiya Janata Party (BJP) government in power in the State, the NRC was undertaken to identify “illegal immigrants” from across the border in Bangladesh. When the result of the NRC was declared on 31 August 2019, it emerged that the process had made no less than 1.9 million people stateless. Among them, as per reports in the media, more than 11 million turned out to be Hindus. The process of NRC – designed as a de facto anti-Muslim project – ultimately ended up excluding more Hindus than Muslims – landing a huge punch in the face of the BJP. In order to selectively protect the excluded Hindus, and therefore to cement a vote-bank with an eye on impending state elections primarily in West Bengal, the BJP forwarded the constitutional amendment which later became the CAA, after the bill was passed by the Indian parliament and procedurally signed by the President of India.[2]

The Assam question has to be viewed through the prism of contemporary history of the region, particularly in relation to the question of illegal immigration and demographic change. The issue of illegal immigration – and its ethnic and linguistic dimension – has been at the center of almost every major political debate in the state of Assam for over three decades. It has remained on the political radar almost by default and is seen by the local mainstream society – largely Assamese-speaking, ethnic Asomiya people – to be of grave importance. When compared to the anti-CAA resistance unfolding in the rest of India, the rationale for stiff resistance against the unconstitutional, communal and divisive law literally bears out the very nature of the diversity that this law threatens to endanger. The giant wave of protests that has engulfed the country could be segmented therefore into two distinct types: One that is unfolding in the rest of India and one that is ongoing in Assam.
The protests that only seem to grow in strength in different parts of India are caused by the unconstitutional nature of the CAA – as it discriminates on the basis of religion in order to selectively grant citizenship to undocumented foreigners and illegal migrants. In Assam, the protests center around the complete opposition to the idea of accepting any illegal immigrants irrespective of religion as enshrined in the Assam Accord of 1985 signed between the Rajiv Gandhi-led Congress government in Delhi and the representatives of the Assam movement. The ethnic Asomiya population fears that the resettlement of Bengali-speaking Bangladeshi Hindus under the CAA will potentially alter the demography of Assam, adversely affecting the cultural and linguistic moorings of the state, turning the Asomiyas into a linguistic minority. At present, Asomiya is the language spoken by the majority of the population in the State, which is otherwise a melting pot of diverse cultures and languages including those spoken by indigenous tribes.

Since protests broke out against the passage and implementation of the CAA, the BJP government in Assam has come down heavily on those resisting – both violent and non-violent protesters have been dealt with severely. A ten-day internet black-out was accompanied and followed up by frequent imposition of curfew in several parts of the State. Internet access was only restored after a High Court directive. Train and flight services have almost crawled to a stop. The heavy hand of the State has left five protestors dead and several injured with the police firing live bullets on unarmed crowds. The use of tear gas and lathi-charges continued unabated since the protests began. Crackdown on those leading the protests and “potential troublemakers” has become a norm with arbitrary arrests and detentions. Social activist Akhil Gogoi, who was spearheading the protest movement was arrested for alleged links with Maoist extremists.

While the State – like in Uttar Pradesh – is clamping down heavily on dissent and is using excessive force against unarmed civilians, the protests across Assam have also frequently turned violent. Protesters – equipped with lathis and burning tyres – are seen to be causing extreme inconvenience to the public. Vulnerable groups like patients and students are in fact facing restricted mobility due to dismantled railway tracks and disrupted train services[3]. For instance, train services have not resumed in Tinsukia till date[4]. The violence, however, seems to have abated over the past few weeks. “Peaceful protests against the CAA are continuing just like in the rest of the country,” Banasmita Bora, a political scientist and expert on North East politics, tells to one of the authors adding: “there is immense anger against both the BJP and the Asom Gana Parishad (AGP), who are seen as traitors. There are calls for a new political formation in the State.” Assam observers told the authors that when the protests were violent, the national media was interested and provided attention, but as the nature of the resistance changed, media’s interest seemed to wane. For example, the BJP state government has issued notices to educational institutions across the state to ‘keep an eye’ on social media activity of the students and teachers effectively bringing down the heavy hand of the law against offending citizens. While major online news portals such as Scroll carried this news, coverage on national news television has been conspicuously absent. People nonetheless continue to gather in thousands to protest the CAA across the State. In the past few days, the BJP has been conducting rallies in favor of CAA in areas of RSS dominance such as Nalbari. The attempt in these rallies and gatherings has been to allay the fears of the BJP voters, clarifying the changes brought about in the existing citizenship laws and how it will impact their lives and the demography of Assam. The anti-CAA protestors have been demanding a full roll-back and the continuation of the terms of the Assam Accord primarily with regard to the final status of immigrants.

Furthermore, Assam observers told the authors about their concern for the anti-CAA sentiment turning into an anti-Bengali witch-hunt. There is also the issue of the Muslim minority of East Bengali origin, who are a persecuted lot. Voting rights of thousands of Muslims in Assam have been stripped away through a mechanism called “D-voter” or “doubtful voter.” Hundreds are already languishing in detention camps. Muslims have been selectively evicted in the garb of “doubt” from many parts of Assam. Many – in personal conversations with Muslim peers, colleagues and volunteers in Assam – expressed fear about the possibility of the movement being converted by vested interests into a rapacious communal cauldron with echoes of the Assam movement that ultimately became anti-Muslim in nature. The leaders of the current resistance need to ensure that the movement does not turn into an anti-Bengali movement. Additionally, the government is promising to grant Scheduled Tribe (ST) status to six communities of Assam– Moran, Motok, Koch, Adivasi, Ahom and Chutia; this is widely seen by dissidents as a conciliatory move and one that could potentially break the anti-CAA movement and lure these communities towards the ruling party.

It appears – for now – that peaceful protests led by the Assamese intelligentsia and students are continuing with large turnouts. Due to lack of information filtering out of the North East and the shifting demands of a rapidly degenerating news media, the veneer of normalcy propagated by the government is being consumed without question by a largely pliant public in the rest of India. Even though violence seems to have seized for the time being, Assam is an ethnic tinderbox waiting to explode if serious thought is not given to the demands of the anti-CAA protestors.

Nazimuddin Siddique is an independent researcher based in Assam. He completed his Ph.D. in Sociology from Gauhati University, Assam.

Roshni Sengupta is a political scientist and Visiting Professor at the Jagiellonian University in Krakow, Poland. Email: [email protected]

[1] The degeneration of the mainstream media in India – from the fourth pillar of a vibrant democracy to a subservient position – has been variously described. Ravish Kumar, one of the few dissenting voices among journalists, coined the term ‘godi media’ or lapdog media to describe the present state of popular news media in India.

[2] The constitutional amendment – which is now the Citizenship Amendment Act – essentially amended the existing citizenship rules to grant selective Indian citizenship on the basis of religion to refugees from primarily three countries – Pakistan, Bangladesh and Afghanistan, thereby contradicting the basic principle of the Indian constitution – secularism. The amendment provides for granting of citizenship to Hindus, Sikhs, Christians, Jains, Parsis and Buddhists from the neighboring nations ostensibly facing religious persecution at the hands of Muslim majority populations in these countries. In a baffling omission, the Act leaves out persecuted Hindus from Buddhist majoritarian Sri Lanka! The exclusion of Muslim minorities from the Act clearly reflects the communal intent of the BJP.

[4] One of the authors has personally visited the site.