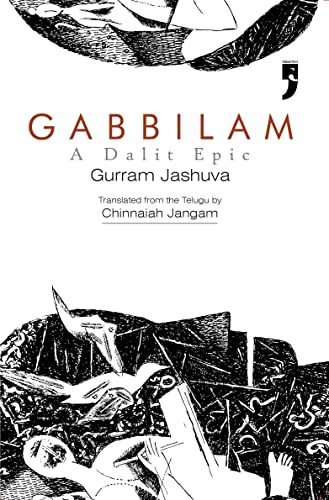 Gurram Jashuva is a legendary figure in the Telugu literary world. Dalit communities in Andhra Pradesh consider Jashuva to be the first modern Telugu Dalit poet, and actively protest his erasure from Telugu and Indian literary history.

In Gabbilam, Jashuva challenges the dominant Sanskrit and Telugu literary sphere by choosing the bat, known as Gabbilam in Telugu and believed to be a bad omen, as it is considered neither a bird nor an animal, to reflect the existential status of untouchables.

The book is translated by Chinnaiah Jangam and published by Yoda Press.

Historically Jashuva was not the first Dalit writer in Telugu. Before him, Kusuma Dharma, Jala Rangaswamy, Nakka Chinavenkayya, Bhoi Bhemanna, and many others wrote books, novels, songs, and essays highlighting the suffering of untouchables, exposing the hypocritical behavior of caste Hindus while demanding the right to equality and exploitation free society. Their writings awakened Dalits, circulated among reformist circles and were read by sympathetic caste Hindus. However, the impact of their writings was marginal on mainstream society as they were made invisible in the course of history. Jashuva wrote nearly fifty books, and they consisted of padya kavyas, plays, novels, kanda kavyas and historical biographies.

All those writings are thematically rooted in a historical context like the classical literary genre but with a conscious aim to highlight injustice and inequality. Classical literature is centered on imaginary romance or the retelling of Brahminical puranic and epic stories, intending to entertain or normalize the status quo in society. Jashuva inverted those themes and inserted social purpose into the classical genre by adding the authenticity of Dalit experience to his writings. He made it impossible for the classical elites to ignore him by choosing the poetic form. He developed a systematic critique of Hindu social and religious practices, excavated the domain of classical tradition through dark humor, and wrote about the neglected lives of people who had endured injustice and exploitation and connected them through the sufferings of untouchables. He lived in a tumultuous period in human history that witnessed world wars and radical ideologies like Marxism that influenced the Telugu literary sphere. He kept his ear to the ground to see and listen to the everyday experiences of Dalits to sharpen his pen and express their misery melodiously. Even though it is disorienting to relive and recreate the suffering, he creatively expressed it by combining classical archaic language with everyday spoken words of the people, i.e., the gramya. Once considered offensive, these words of oppressed folks entered the lexicon of highly acclaimed classical poetry that subverted the Brahminical textual language. Because of their unique ability, Jashuva’s poems were sung in village theatres and became people’s songs. They even met the ‘standards’ of classical language, a rare feat of accomplishment.

Historically, Jashuva was avant-garde in Telugu literature. He entered their domain of classical poetry as a Dalit and proved himself a phenomenal poet. His work forced the celebrated writers of classical Telugu literature of his time, to not only recognize him but also honor him with the highest awards and shower him with felicitations. Challapalli Venkata Kavi decorated his feet with golden bracelets (gandapenderam) and made Jashuva sit on an elephant that took a procession in the streets. His masterpieces like Firadosi and Mumtaz Mahal explored injustice, suffering, and the anguish of losing loved ones, and will remain celebrated texts. His contemporaries like Vishwanatha Satyanarayana wrote eulogies to Brahminism and upheld caste inequality as dharma. Added to his existing oeuvre of masterpieces was Gabbilam. Published in 1941 at the high noon of anti-colonial nationalism when Dalits were emerging as critical players in the nationalist movement, Gabbilam, as an epic text, shook the foundations of Brahminism through a critical exploration of its ideological roots and the way it perpetuates inequality and oppression. To understand its role as a seminal Dalit text, we will study four aspects of Gabbilam; a) the ideological context; b) the title of the text and its symbolic significance; c) the creation of the protagonists; and d) the thematic content of the text. They will enable us to locate the text in its historical context more precisely. Moreover, it is imperative to re-read the preface written by Jashuva to understand how far the text represents an alternative to mainstream discourse and adds its historical significance as a Dalit epic. To quote Jashuva,

I wrote this text by keeping Kalidasa’s Meghaduta

(Bat) as the title. For some readers, it might sound

harsh. The protagonist in Meghaduta sends a mes-

sage of love. My protagonist sends a searing, poignant

message. The protagonist in Meghaduta was sen-

tenced to one year, but my hero was sentenced from

birth. For generations without any end. The hero in

the Meghaduta was a Hindu cupid suffering from a

burning desire to meet his lover. My hero is a victim

of poverty that burns his stomach. That is why he says,

“even to hear my tearful story; one needs a soft heart.”

These lines reveal Jashuva’s attempts at constructing an alternative discourse similar to the one found in classical Hindu texts like Meghaduta. By relating the classical discourse to the life and sufferings of an untouchable—essentially the experience of caste oppression—Jashuva subverted the dominant paradigm, which had so far excluded marginalized people’s experiences from textual traditions. This social reality was articulated through the representative voice of millions of fellow untouchables. Jashuva projects himself as the ideological contender for a largely Brahminical Hindu leaning dominant literary and intellectual traditions. In selecting the title, Jashuva draws a similarity between the life of an untouchable and that of a gabbilam—a bat. Just as the bat symbolizes a bad omen and is treated neither as a bird nor an animal in local culture, similarly, an untouchable is not treated as a human being despite being born human and is denied basic human needs and dignity. By drawing out the similarity between the untouchable and the bat, Jashuva powerfully depicts the reality of the life of an untouchable. In Jashuva’s own words, ‘Unlike the noble kings, exquisite birds like swans and parrots cannot become his messenger. That is why I chose a regular visitor to the homes of the despised, a bat, as his messenger. I hope readers will agree and understand the aptness of the title.’ Gabbilam is thus the eponymous protagonist of the text while serving, simultaneously, as the alter ego for the poet himself and represents a collective ‘untouchable’ pathos.

The striking aspect of the text is the portrayal of the protagonist as a celibate hero. It is a symbolic protest against the inhuman treatment meted out to untouchables. The protagonist of Gabbilam says, ‘When I am an outcast, why marry and give birth to another? What need there is for a wife for one so deprived.’ Here Jashuva reiterates the futility of conjugal life for an untouchable for whom procreation would mean perpetuating the same oppression; the lines reverberate with Jashuva’s suppressed anger and frustration. In his presentation, Jashuva laments the different dimensions of caste oppression and the miserable conditions of the untouchables. Most importantly, protests against Hindu religious and social practices are often marked by scathing ridicule. While contesting the Hindu social and religious philosophy, the text is poignant while referring to the contemporary political movements such as the anti-colonial nationalism of Gandhi and Ambedkar’s role in the emancipation of untouchables.

Jashuva, as a poet and intellectual, was unique, especially in the context of anti-colonial nationalism and the growing political assertion among Dalits. He maintained a cautious distance from active politics. However, his writings make it clear that he was aware of his time’s political and social realities. He never joined any political organizations and did not attend nationalist Dalit or caste Hindu organized meetings. This may have been because of his precarious life riddled with financial strife and preoccupation with daily struggles to feed his family.

Moreover, his uncompromising critical bent of mind made him more inclined to expose the hypocrisy of institutions and individuals and often led him to observe things from a distance rather than get involved in murky politics. Equally important was his familial context: socially, he did not have extended family connections (the inter-caste marriage of his parents precluded this) that would have given him some economic footing to look beyond survival. That does not mean he was an apolitical person. On the contrary, he was channeling the age old history of Dalit resistance through poetic imagination.

Why Do You Fear My Way So Much: Poems and Letters from Prison – A book excerpt