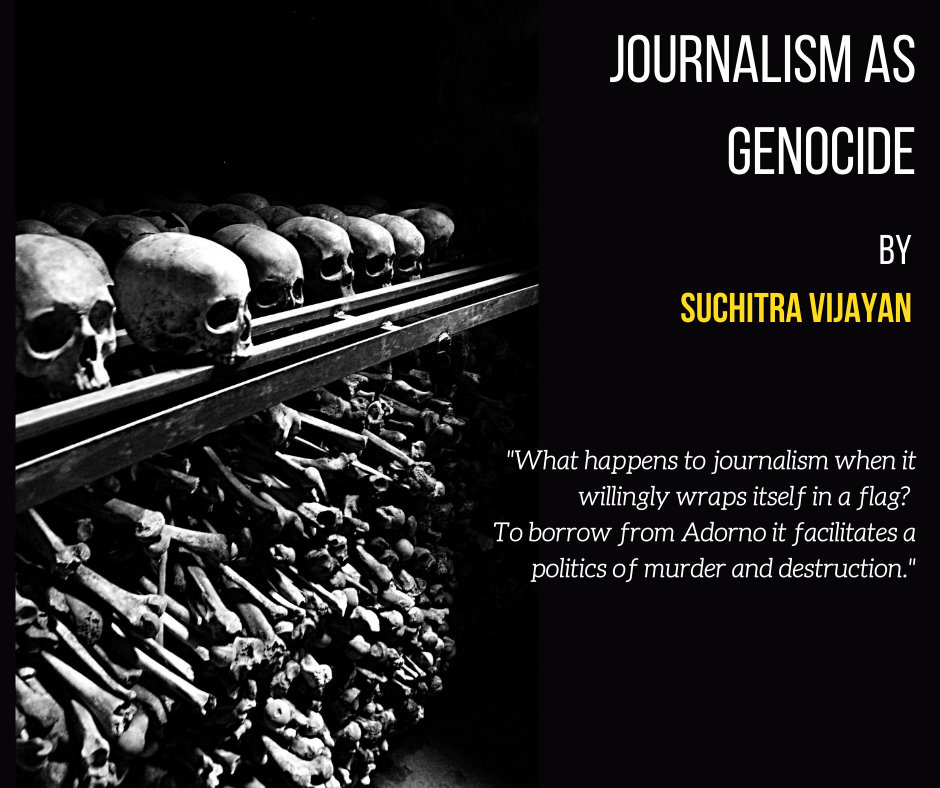 Suchitra Vijayan is a barrister, researcher and the author of Midnight’s Borders: A People’s History of Modern India. She is the Executive Director of The Polis Project and tweets at @suchitrav. This essay was first published on 30 March 2016

In its 2003 verdict, the International Criminal Tribunal for Rwanda (ICTR) found Rwandan journalists Ferdinand Nahimana and Jean-Bosco Barayagwiza guilty of genocide, incitement to genocide, conspiracy, and crimes against humanity. The case against Nahimana and Barayagwiza raised important questions regarding the role of the media and their social accountability. For the first time since the Nuremberg trials, hate speech was prosecuted as a war crime. The judgment declared that the way the journalists had acted constituted “journalism as genocide”.

Rwandan cultural anthropologist Charles Mironko analyzed confessions of a hundred genocide perpetrators. His work confirms the thesis that hate messages in the media had a direct effect on the dehumanization of the population that was subject to persistent slander. Several months of this behavior, in the absence of credible reporting, conditioned the population to hate, and kill.

Similarly, the tribunal held that the media – both newspaper and radio – “relentlessly, targeted the Tutsi population for destruction” and portrayed them as a “political threat”. The hate media essentially became the background score to the state’s dispensation of arbitrary authority, and the journalist became both the petty sovereign of the state and useful idiots. In this, it used a line of reasoning similar to the Streicher case at Nuremberg, where Der Stürmer, a weekly tabloid-format Nazi newspaper, was found to have “injected into the minds of thousands of Germans a poison that caused them to support the National Socialist policy of Jewish persecution and extermination”.

Der Stürmer, like Kangura, its Rwandan equivalent, was filled with stories of slander, libel, smear campaigns, and fabricated stories. By journalistic standards, both publications were nothing more than substandard tabloids. Yet, they enjoyed enormous influence and support from leading public figures in various fields, political elites and other popular journalists. Both cultivated powerful patrons and molded their audience into a controllable, incitable mob of puppets.

The behavior of sections of the Indian media over the past few decades has an eerie similarity to the behavior of Der Stürmer and Kangura in the run-up to violence, ethnic killings, and genocide. The sinister parallels were evident in the 2002 Gujarat. A study by PUCL in 2002 found that two vernacular newspapers – in particular, Gujarat Samachar and Sandesh – ran false stories, fabricated sensational headlines with the intention to “provoke, communalize and terrorize people”, which incited and encouraged Hindus to kill Muslims. Rather than perform the ethical duties that journalism demands, these papers published doctored material without evidence, and furthered arguments that incited violence. Sandesh featured a front-page headline on February 28, 2002, the day after the burning of a train in Godhra, “70 Hindus burnt alive in Godhra”, followed by another headline that proclaimed “Khoon Ka Badla Khoon” (Avenge Blood with Blood). Eyewitnesses accounts from Naroda Patiya, scene of one of the worst massacres, describe mobs carrying weapons and copies of the Sandesh with the headline, “Khoon Ka Badla Khoon.” PUCL’s report on the 1984 anti-Sikh riots in Delhi following the death of Indira Gandhi also reports the same slogan being shouted by the mob leading up to the killings.

The Gujarat riots are not an exception; it simply follows the trajectory of hate entrepreneurship practiced by some journalists and a section of the media. It has a genealogy starting from the Jabalpur riots in 1961, to the riots that consumed Aligarh; Ayodhya to the 2013 Muzaffarnagar riots, and the recent spate of lynchings.

French historian Jean-Pierre Chrétien describes the behavior by journalists in inciting hatred and violence as ‘the democratic alibi’. A democratic alibi divorces the question of ethics from the political and employs the mechanisms of mass conditioning and mobilization required to create group hatred. A democratic alibi is the precondition to riots, lynching, political trials, extrajudicial killings, military occupation and genocidal violence. Its legitimacy lies in the justification of collective violence either by the state or the mob, and begins by creating a dispensable enemy of the state – the “anti-national”, “the secular”, “the minority”

All the ingredients for conditioning a democratic alibi that existed in Nazi Germany and Rwanda exist in India today.

An established pattern of presenting and commenting on the news transforms political debate into righteous passion against individuals and groups that disagree with the status quo. The targets of violence are marked with precision, taken as public hostages and accused of being enemies of the state. Later they explain what has to be done to this enemy. Through constant repetition, they construct a political, moral and historical alibi that eventually becomes the accepted truth. In this steady journey into the abyss of intolerance, journalists and news anchors become agents of the state and even annihilators of society. All the ingredients for conditioning a democratic alibi that existed in Nazi Germany and Rwanda exist in India today.

In the case of Gujarat and other instances, sections of the media were not only complicit in conditioning, inciting and producing the riot; they were also responsible for explaining and interpreting the violence. They repeatedly justified the carnage as spontaneous mob violence, used language that neutralized “the horror and injustice of the subsequent violence”.  Similarly, in the case of the recent lynching in Nagaland of a Muslim man, Sayed Sarif Uddin Khan, on allegations of rape, there was a clear instance of misinformation and fabrication that amounted to incitement in the local media.

Upon analyzing witness testimonies from the Nuremberg, Yugoslavia and Rwanda trials, two things become increasingly clear. First, truthful reporting of facts, analytical investigation of issues, and a stand against violence by journalists in all these instances could have both changed the behavior of the perpetrators, and in some instance even prevented the slaughter. Second, when airwaves become a platform for ideological, socio-religious-nationalist populism, there are clear roadmaps with milestones and perfected patterns of hate that lead to eventual violence and destruction of a society. Some of these milestones include:

While the list enumerated above is a repetitive pattern of behavior gathered from over hundred witness testimonies from Nuremberg to Rwanda, their relevance resonates for India today, as we are birthing a new dystopia of hate and bigotry. This list holds up a haunting mirror to the ugliness on display and the vileness employed by some Indian news channels, anchors, and journalists. It is as much a war over the minds of the people, as it is a war to enact extrajudicial and unconstitutional laws that encroach into and legislate the private lives of citizens. The absolute essence of this priming is the stamping out of pluralism in all its forms – pluralism of ideas, opinions, faiths, beliefs, memories, myths and even gods.

What happens to journalism when it willingly wraps itself in a flag? To borrow from Adorno it facilitates a politics of murder and destruction. Sudhir Chaudhary, editor, Zee News, in an interview to Outlook magazine stated that: “It has become necessary for media houses to take a stand on certain issues. It has to be a nationalistic approach. That benefits the people of India. What do you call neutral and secular? No one is neutral anymore. I will pitch for a nationalistic reporting, …” He further states, “If you want to live in India and want the breakup of India, then why do you want to live here? Leave the country and go.”

What happens to journalism when it willingly wraps itself in a flag? To borrow from Adorno it facilitates a politics of murder and destruction.

While nationalism will continue to mediate many facets of our life, it cannot become the prism through which we understand the complexities of the world. Chaudhary, and many like him, hold an immense power of persuasion and present a position of unthinking hawkish nationalism that uncritically propagates a retreat to banal patriotism. This excludes the possibility of criticising the state and its political projects. Journalism is not the witch’s brew from Macbeth, and journalists cannot become the agents of chaos and conflict. Journalism demands detachment and objectivity that allows for dissent, disagreement, and freedom of expression. In the absence of such ethics, it clears the ground for violence and does a great disservice to the democratic way of life.

While handing down its judgment in the media trial, the ICTR rightly criminalized the hate speech of a powerful media against a vulnerable minority. The great fight for individual humanity against crimes by the state – and the journalists who defend it – has to begin with accountability. To rephrase what Rwandan journalist Thomas Kamilindi testified at the war crimes’ tribunal, how should we hold journalists accountable for their actions, and if need be prosecute them, if they knowingly caused harm, and incited violence. We must find a way to articulate and respond to such abuses of power without violating the principles of freedom, which are an indispensable cornerstone of democracy.