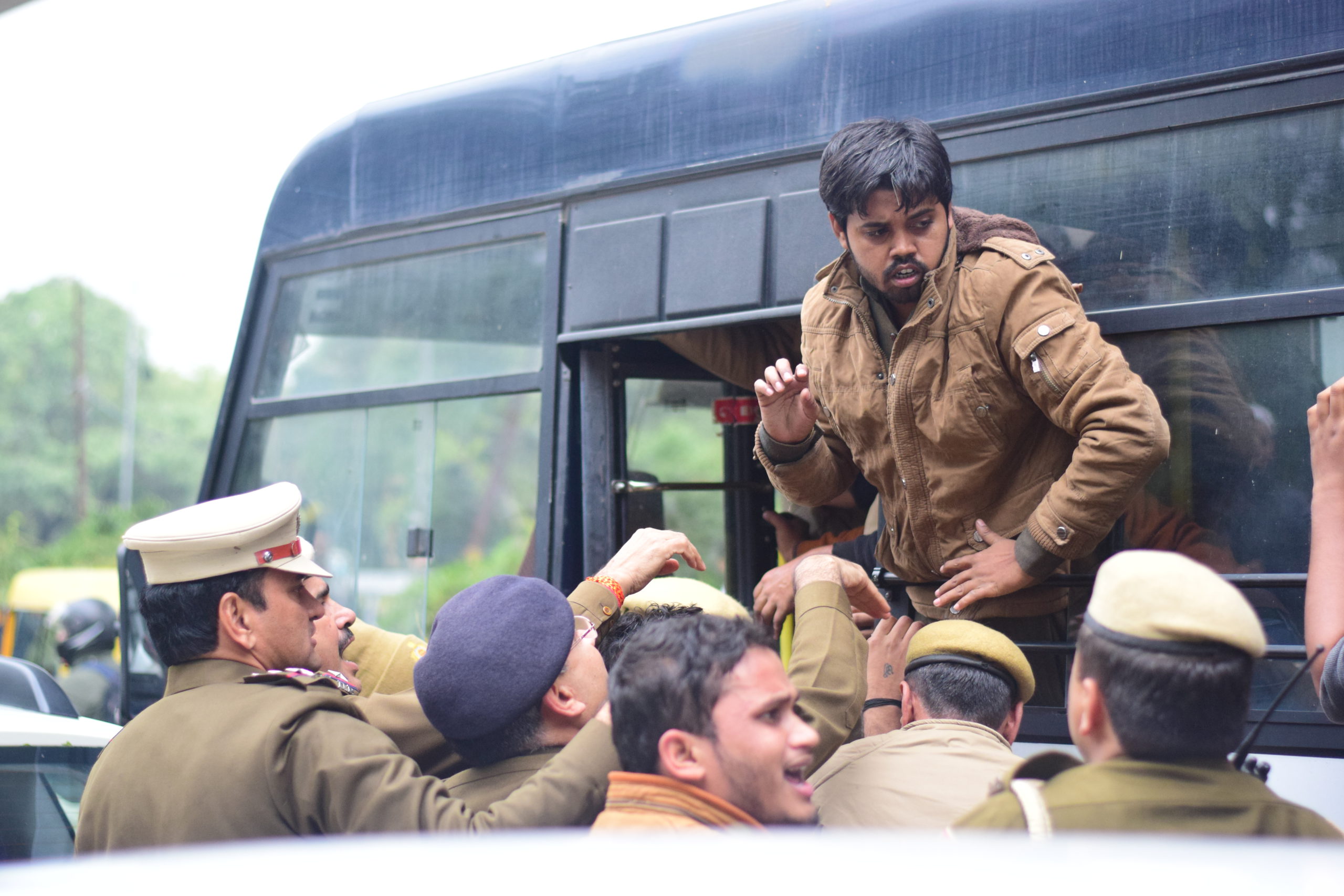 Mobilizing against Islamophobia and defending students’ rights is a way to protect Indian democracy: A profile of Asif Iqbal Tanha

In collaboration with maraa, The Polis Project launched Profiles of Dissent — a new series centered on remarkable voices of dissent and courage in India and their personal and political histories, as a way to reclaim our public spaces. These are prominent writers, poets, activists, and human rights defenders who have been in prison, held under the Unlawful Activities (Prevention) Act. The profile features Asif Iqbal Tanha, a student leader who has been unjustly accused of having orchestrated violence during the December 2019 protests in Delhi.

Fayiza CA is a freelance journalist based in Delhi. She is currently pursuing her masters in Media Governance at Jamia Millia Islamia.

Asif Iqbal Tanha is a 24-year-old student from Hazaribagh in Jharkhand, who is studying for a BA in Persian Studies at Jamia Milia Islamia (Jamia). He has been interested in politics from a very young age and when he was 15joined the Students Islamic Organization of India (SIO) – the student’s wing of Jamaat-e-Islami Hind. Tanha enrolled at Jamia Milia Islamia in 2017 and has since been instrumental in organizing protests and mobilizing students against the anti-Muslim measures of the Bharatiya Janata Party (BJP). Tanha fought against injustice in the campus and actively participated in the protests for the restoration of the Students Union and the right to association, which were suspended since 2006. He has been an active member of Where is Najeeb? – a movement that mobilized against the disappearance of Najeeb Ahmed, a student of Jawaharlal Nehru University (JNU). He is part of United Against Hate and has extensively contributed to its campaigns against attacks on Muslims in the country. Tanha was involved in the protest movement against the Citizenship Amendment Act (CAA) and the National Register of Citizens (NRC) right from the start and was an important decision-maker in the Jamia Coordination Committee (JCC). As the movement spread and protests were staged across the country, he traveled around giving speeches and mobilizing people against the CAA. Before his arrest, Tanha was also active in relief works during the COVID-19 pandemic.

Charges: Asif Iqbal Tanha was summoned by the Crime Branch of Delhi Police investigating the Jamia violence on 16 May 2020 and, after a night-long interrogation, his arrest was registered on 17 May. Tanha was frequently called for interrogations by the Crime Branch after a First Information Report (FIR 0298-2019) was registered against him and other students of Jamia in December 2019. On 5 April 2020, his room in Delhi was raided in his absence by a special cell of the Delhi Police. Three days later he was summoned again by the Police, taken to different Police stations, and interrogated at length while a special Police cell seized his mobile and some Urdu and Persian books from his room. Before his arrest, his room was raided again, and his friends threatened. Asif Iqbal Tanha is accused to be one of the key conspirators of the violence that took place in Jamia on 15 December 2019. He was sent to Tihar Jail on judicial custody for 14 days. On 21 May, he was booked under a second FIR (59/2020) and was charged under the draconian Unlawful Activities (Prevention) Act (UAPA) and other sections of the Indian Penal Code such as 124A (Sedition), 302 (Murder), and 147 (rioting), 148 (rioting, armed with deadly weapon).

Update: Asif Iqbal Tanha was further sent to judicial custody until 26 June 2020. During the hearing of a plea filed against the 30-day custody, Additional Sessions Judge Dharmender Rana expresses his reservation about the investigation, defining it biased.  Tanha was granted bail in the case registered under FIR 0298/2019 by Delhi High Court. The bail plea claimed that there were no specific allegations of violence against him in the charge sheet and he has not been assigned any role in connection with any act of violence. However, he still remains in jails as he has been repeatedly denied bail in the case registered under FIR 59/2020.

Update 24 August 2020: Many mainstream Indian media alleged that Asif Iqbal Tanha confessed to have orchestrated the Delhi violence and to have played a part in the Jamia violence. In response to this, a plea was submitted to the Delhi High Court which sought inquiry into the leak of information to media by the official authorities. The Delhi High Court asked the Delhi Police, two media houses, and two social media platforms to provide clarifications. There has been no response yet.

An excerpt from a speech given by Asif Iqbal Tanha at an anti-CAA-NRC protest in Mangrol, Rajasthan on 18 March 2020

The Police has filed FIRs against me and my friends in an attempt to intimidate us to back out from protesting. But we will never be afraid of FIRs. Because this fight is for the community, for our rights, for reestablishing democracy in this country. By bringing in-laws like CAA, they are trying to divide the country on lines of religion. When the Parliament passed the Anti-Muslim Citizenship Amendment Bill on 9 December, I along with my friends in Jamia started to register our protest against the Bill because we believed it is anti-Muslim, undemocratic, and anti-constitutional. Last year the central government had completed the process of NRC in Assam and disenfranchised more than 19 lakh citizens. We don’t want it to be happening to the whole country.

So Jamia community gave a call for a Parliament March on the 13th of December 2019 against the draconian act. The government was intimidated by the protests when a large number of students and locals gathered to question the attack on their rights. The government systematically attempted to suppress the protests by sending forces and using tear gas shells, bullets, and ‘mirchi bombs’. The Police has filed FIRs against me and my friends in an attempt to intimidate us to back out from protesting. But we will never be afraid of FIRs. Because this fight is for the community, for our rights, for reestablishing democracy in this country. By bringing in laws like CAA, they are trying to divide the country on lines of religion. But we Jamians are followers of Dr. Abul Kalam Azad, Ali Jauhar and Mahmudul Hassan. We will not let them do this. Amit Shah or Modi cannot just deny citizenship to anyone because he is a Muslim. We have built this country on secular values and its constitution guarantees each of its citizens the right to assert their identity. We have fought the British in 1947 and we have to fight these robbers who are trying to rob us off our rights. Inshallah.