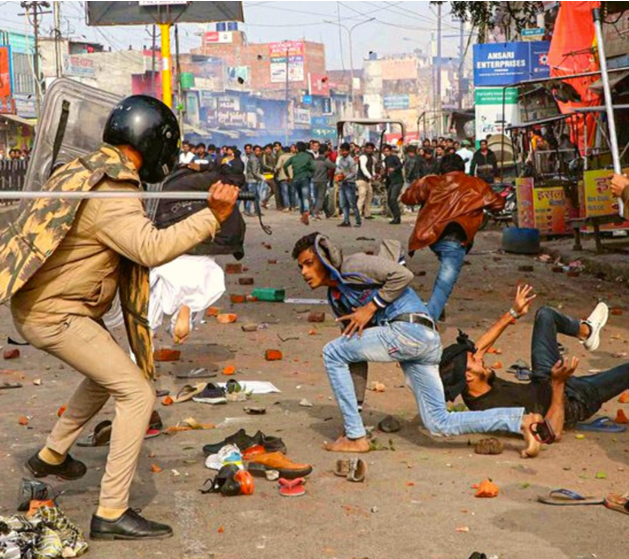 Since 2 January 2020 a team of specialists from the fields of law, higher education, social activism and non-profit organizations have keenly documented statements and testimonies of people in Uttar Pradesh, where violent state action against anti-CAA protestors has claim 25 lives since December 2019. The People’s Tribunal for State Action in Uttar Pradesh consists of the following partner organizations: All India Democratic Women’s Association (AIDWA), Anhad, Constitutional Conduct Group (CCG), Campaign for Judicial Accountability and Reform (CJAR), Delhi Science Forum, Karwan-E-Mohabbat, Mazdoor Kisan Shakti Sangathan (MKSS) National Alliance of People’s Movements (NAPM), National Federation of Indian Women (NFIW), Not in My Name Campaign, and the Satark Nagrik Sangathan (SNS). The first part of this collective effort, a report on the violence in Sambhal, was published by The Polis Project here. The Jury’s Observations of the People’s Tribunal are published below.

As peaceful protests were organized around the country against the Citizenship Amendment Act (CAA), National Register of Indian Citizens (NRIC) and the National Population Register (NPR), the state of Uttar Pradesh stands out for the intense harshness of state action to crush the voices of dissent. As in most corners of the country, people, especially women in large numbers, spilled onto the streets to protest the amended citizenship law. It is only in UP [Uttar Pradesh] (and coastal Karnataka) that these protests have turned violent; in both significantly, it is the Bhartiya Janata Party which is at the helm of government.

What unfolded was not in the nature of customary state action to control public protests if they turn violent. The statements of the Chief Minister [Ajay Bisht/Yogi Adityanath] were highly intemperate and entirely inappropriate for an elected leader of the most populous state in India. There were many deeply troubling reports of the brutality and intensity of police action which followed.

There were contested reports that in some places, protesters turned violent, although they claim that the rage of the rioters was spurred by police attitude and action. But the violence by the police against the rioters was entirely disproportionate, without following the prescribed protocol of warning, and gradual escalation of violence. Instead videos show the police shooting above the waist, to kill, often in hot pursuit through narrow lanes where there are no protests or crowds. Most of those killed were very poor working-class men, whose families insist they had nothing to do even with peaceful protests.

Through all of this, Chief Minister Adityanath made a call for revenge, followed by even more brutal police raids and assaults. Muslim people have received notices to pay high damages for alleged destruction of public property (including even police batons broken while beating people), without any judicial finding as required by law to prove their responsibility for destroying the properties.

And as news began filtering in of the police rampaging in UP, the Chief Minister issued a triumphalist message of self-congratulation from his official Twitter account: “Every rioter is stunned. Every troublemaker is shocked. Everyone has fallen silent, awed by the strict Yogi government.”

A number of citizen fact-finding groups visited Muslim homes in many towns in UP and reported the rampage of hate by men in uniform even inside these homes. Cars and scooters were overturned and burned, television screens and washing machines smashed, cash and jewellery looted, crockery, even toys shattered, a lifetime of a family’s belongings devastated in minutes, the family inconsolable. They banged and broke down doors. The beat with their batons old people, women, even children, if they tried to block their way, pleading for mercy. They shouted the most vulgar slurs about Muslim people.

The police registered literally thousands of ‘unnamed’ police complaints in several cities with high Muslim populations. They use this to detain Muslim people at will, and as a weapon to silence anyone who may complain or testify against the police. People were scared to speak to anyone holding a camera, and if they did, they covered their faces. There is an intense sense of terror among the entire Muslim population in urban UP, the men dreading being charged with grave crimes, the women of attacks to their homes. Large parts of Muslim settlements have emptied out.

These many deeply troubling reports of the brutality and intensity of police action led to the formation of this People’s Tribunal to investigate the truth of the matter. A number of civil society and human rights organizations came together for this. These were the All India Democratic Women’s Association (AIDWA), Anhad, the Constitutional Conduct Group (CCG), the Campaign for Judicial Accountability and Reform (CJAR), Delhi Science Forum, Karwan-E-Mohabbat, Mazdoor Kisan Shakti Sangathan (MKSS), National Alliance of People’s Movements (NAPM), National Federation of Indian Women (NFIW), Not in My Name Campaign and the Satark Nagrik Sangathan (SNS).

The testimonies presented during the Tribunal were by victims of police brutality, various activists both present and who have since met victims, and experts on the various issues that the tribunal exposed. During the proceedings, testimonies were presented the intensity of police violence perpetrated on innocent citizens, including against minors, the role of the Chief Minister and senior leadership in inciting this violence, the role of medial officers who were complicit in perpetrating violence and its impact on people.

The testimonies suggested that Uttar Pradesh is in the throes of what is fast threatening to become a gravely culpable crime against humanity. It appears that the Chief Minister Adityanath has declared war on the Muslim citizens of his state, inciting and encouraging his police forces to unleash upon them an unlawful and brutal reign of terror. It is not as though police bias and violence against minorities is unusual in communal violence, however what we are witnessing in Mr Adityanath’s UP is the police force itself becoming the riotous lynch mob. What is unfolding in UP is on a scale and with a methodological deliberateness not witnessed so far outside Kashmir and the North-East, touching a highly dangerous new low.

The members of the Jury of this People’s Tribunal include three retired judges of the Supreme and High Courts, with impeccable reputations for being their integrity, fairness and commitment to social and economic justice, leading academics, social workers, retired civil servants of high repute, and a leading psychiatrist. We are grateful for their observations, in which they decry that ‘the entire state machinery, led from the top, acted with grave prejudice and perpetrated violence targeting one particular community, the state’s Muslim population, and the social activists leading the movement’. This report may not in itself have legal force, but it has high moral value, calling out the grave injustice and debasement of public office in Uttar Pradesh, and compassion and empathy with the suffering people targeted by the state violence.

Members of the Jury

The jury of this People’s Tribunal is deeply worried and dismayed by the testimonies placed before it. It is convinced that the entire state machinery, led from the top, acted with grave prejudice and perpetrated violence targeting one particular community, the state’s Muslim population, and the social activists leading the movement.

The following were the main findings of the Tribunal.

The Jury found and concluded that the UP police has been guilty of inflicting enormous violence targeting the Muslim community, peaceful protestors, and not even sparing those were not involved in the protest. The police brutality included:

Violence inflicted on protestors,
The arrests of and filing of false cases against innocent people,
The destruction of vehicles and property by entering people’s homes, as well as CCTVcameras
The threats and intimidation of people picked up, against speaking the truth about whathappened to any authority or to the media,
The communalised abuses against victims,
Custodial violence even on minors and
Firing and killing people without following the law,
Preventing medical personnel from treating the injured, and threatening the injuredagainst accessing medical care.The complaints of the victims about police brutality, violence and destruction of property were either not filed or filed incorrectly. On the other hand, thousands of FIRS were filed against unnamed persons on accusation that protestors had become violent with the intention of continued harassment and intimidation.

The jury found that political and administrative leadership has failed to control the widespread atrocities caused by the police. In several instances, the jury have observed that senior leadership such as the Chief Minister directed the Police to use the strongest force against protesting citizens by using words like “badla” or revenge.

The Jury concludes that the state administration, through arbitrary and extensive imposition of Section 144 CrPC in several districts, shutting down of internet services, violated citizens’ rights and facilitated police violence.

Several people testified that hospital authorities and medical officers denied emergency medial care to even seriously injured victims. It was suggested that this was done allegedly under pressure from the police and state administration. This has clearly been in violation of the Article 21 of the Constitution and the various decisions of the Supreme Court and international treaties to which India is signatory, finally the Hippocratic oath of medial professionals. Such denial does not take place even during war!

The Jury takes note of the looming anxiety within the families of those affected by this violence. These instances of violence, abuse, and destruction of homes by the police have resulted in absolute fear and trauma in the community. It is important to understand that when the state is the perpetrator itself, there is no sense of security for those affected. It appears that there is no health care or legal help accessible to victims in these difficult and testing times leaving them at a state of acute depression and or anxiety. Chances are that there will be large scale Post Traumatic Stress Disorder in this population unless addressed.

The Jury found several activists, journalists, human rights defenders and lawyers who stood up to injustice were being persecuted, intimidated, harassed and tagged as ‘urban naxals’, anti – nationals. The Jury condemns the arbitrary arrests of the human rights activists and defenders.

Issues around Juveniles and Minors

The Jury is of the opinion that the UP Police and State Administration have violated every principle enshrined in the Juvenile Justice Act, 2015. Every single agency and mechanism that could have come to the rescue of children failed to do its duty. It also reveals that even the best of laws cannot fulfil its purpose if the executive machinery does not wish to see it being implemented well and judiciously.

Recovery of costs by the state

The jury found that the police has been arbitrarily issuing notices to people for recovery of costs of damage to public property allegedly caused by them without specifying any details. Obviously, this cannot be done without establishing the culpability of the person in a court of law. These are intimidatory and illegal tactics being employed by the police. In fact, there is considerable evidence to show that the police itself indulged in destruction of private property of innocent people.

The state of affairs in UP shows a complete collapse of rule of law. In fact, the very state administration that is charged with protecting rule of law is perpetrating violence upon its own people.

BY Pooja George and Vedika Inamdar