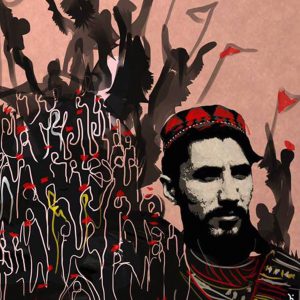 This essay was written as an introduction to my earliest attempts to produce a photographic work on the victims of America’s wars. Focusing on the communities living on the North West Frontier Province (NWFP) or Khyber Pukhtunkhwa (KP) as it is today called, it was a small attempt to speak out against the wars we had manufactured, and the millions of lives we were destroying. Written in the fall of 2011, it accompanied a few grant proposals I put together for this work. And whereas those attempts at funding support failed, this work, these communities, remain a part of my more recent and broader project in Pakistan tentatively titled Justice In Pakistan for which I did finally secure some much needed funding.

The video is grainy, and difficult to view on the small mobile phone screen its being played on. There is a man being interviewed by a BBC correspondent – she is questioning him about Osama Bin Ladin and about Al-Qaeda. I can’t make out the details of the interview, and I can’t see the man’s face – he is turned away from the camera but I can see his bearded profile. “That is my father” Abubabakar Hayat says pointing to bearded figure in the screen. I continue to watch closely – the scene in the video cuts to one where a group of men, handcuffed and blindfolded, are being loaded into the back of a Pakistan Police vehicle. As the last man is pushed in – wearing an orange blindfold, dressed in a dark brown shalwar kameez, Abubakar’s excited voice cuts in..”There – that is my father Shokat Hayat. This is the last view I have of him.” The other children are sitting quietly around me, looking at me. I am not sure how many times they have seen this video before, but clearly they are more interested in my reactions. Their father disappeared on 15th March 2009, picked up by the Pakistani ISI and the Police, and was never heard from again. Now, this poor quality video, is there only evidence of him alive. I want to ask questions about his involvement with the conflicts in Afghanistan, with the regime of the Taliban or whether he was involved in activities against the American presence in the country. I have been told that he was involved with groups speaking out against the Musharraf regime and the American war in Afghanistan. That he had been in Afghanistan and collaborated with the Taliban regime. But I stop myself. It’s not his guilt that I have come to establish, but the legality of his disappearance and the unconstitutionality of his arrest. I remind myself that whether he is gulty of crimes or not, or whether he is religiously fundamentalist or not, the issue here is of law and the right to due process. It is the fact that Pakistani citizen’s rights – a commodity of no importance to the very people responsible for upholding then, were violated. There is nothing more to say.

Below is the essay I wrote one quiet, late night in Stockholm in 2013 just as I was about to start this work. I remember I was on the phone with a friend, and after many days of struggling to figure out what to write, this simply fell out in less than a couple of hours. I have since left it unchanged. It is what I had wanted to say.

The vanquished know war. They see through the empty jingoism of those who use the abstract words of glory, honor, and patriotism to mask the cries of the wounded, the senseless killing, war profiteering, and chest-pounding grief. They know the lies the victors often do not acknowledge, the lies covered up in stately war memorials and mythic war narratives, filled with words of courage and comradeship. They know the lies that permeate the thick, self-important memoirs by amoral statesmen who make wars but do not know war.

I have come to the city of Peshawar on Pakistan’s Northwest frontier in search of a war – the long war. The one fuelled by an infinite righteousness, executed without regard to frontiers, the laws of conflict or even a definition of success. The one fought for my American way of life, the one that I must not question nor look at too closely. The one that I see using a host of previously unacceptable tactics including but not limited to targeted killings, drone attacks, suicide bombings, rendition flights, targeted ‘disappearances’, black sites, off-shore prisons, outsourced torture, unlimited detentions, military tribunals, legalized torture, and private armies. The one whose reality is largely invisible to us ordinary Americans, veiled behind severe media restrictions, closure of combat operational areas, a concentration of decision making in a handful of military and bureaucratic elite and the collaboration of our highest legal institutions in helping maintain its distance from our laws and procedures of justice.

I have come to Peshawar to touch this untouchable war and meet those who are bearing the crippling burden of its consequences. I have come to record their stories and complete the war’s narrative – a narrative which has to date been owned and defined by the powerful. I have come here to know what this war looks like away from the self-congratulatory rhetoric of the politicians guiding it, the sweeping generalizations of the pundits facilitating it and the elaborate obfuscations of the media selling it. I want to know its ugly reality and to walk into the darkness of the slums of Pakistan’s cities, the stifling infinity of its refugee camps, and the cold, silent living rooms of its affected citizens. I want to talk to and hear the stories of the ungrievable lives, erased from our consciousness, alien to our sense of responsibility, the ones that are torn apart even before the first bullets are fired, the first bombs detonated2.

Since 2001, the conflict in Northwest Pakistan has killed and injured thousands of civilians, displaced millions, and destroyed countless homes and livelihoods. Exact figures remain difficult to come by due to constraints on the media, general insecurity, remoteness of the terrain of the conflict, and both American and Pakistani government enforced secrecy around drone and clandestine operations. It is estimated that in 2009 nearly 2,300 civilians were killed in terror attacks with many more injured. Counting losses from Pakistani military operations and U.S. drone strikes, actual civilian casualties in Pakistan could be three times that number, far exceeding the casualty levels in neighbouring Afghanistan.3

Though waged in the country’s frontier region, the war’s tentacles have reached into the lives of those living in its urban centers, its horrors enveloping even those who are innocent of its interests, – academics, intellectuals, students, and the bystander on the street. Military operations have forced millions from their homes and lands, disrupting life and society in the tribal regions and tearing apart the delicate fabric of Pathan tribal culture. Drone attacks have killed with impunity with few bothering asking who was targeted – and who actually killed. Retaliatory suicide attacks have crushed the life of Pakistan’s centers, killing and maiming without mercy. State intelligence and security agencies have ‘disappeared’ thousands into torture and detention centres in Afghanistan, United States and elsewhere, leaving husbands, wives, sons, daughters and relatives searching for their loved ones. Those who have returned from incarcerations in America’s prisons and detention centers, are physically and emotionally crippled, and struggling to rebuild shattered lives and souls.

The scars of the war are long-term and devastating and its wake is tearing apart families and devastating entire communities. And yet the unrelentingly rhetoric of the war is drowning out the pleas of those being crushed by it. A slickly produced visual record of its execution is erasing images of those bearing the scars of it. A deafening silence surrounds the horrors unfolding here, and a shocking indifference informs the priorities of those presuming to govern here. Pakistan’s constitutional laws lie in tatters, her citizen’s rights subsumed under the demands of a greater power, and her political leadership pre-occupied in demonstrating its credential as a war ally.

I am traveling across the cities, slums, refugee camps, and frontier villages of the country, to hear the stories of the people who are the living and breathing front of this never ending war. It is here, in a thousand different living rooms, that the other side of this story is told, and where one meets men and women who have, in the face of extraordinary circumstances, been forced to confront their shattered lives with near superhuman stoicism. It is here, over cups of hot tea and in the presence of shell-shocked souls, that one begins to comprehend the deep, permanent and devastating impact of this war. And there are many; victims of drone attacks, widows of men killed in suicide bombings, displaced families struggling to find an existence in squalid and desperate refugee camps, families looking for their ‘disappeared’ fathers, sons and husbands, children of parents killed in artillery barrages, and innocent sons returning from torture and brutal incarcerations. These are the stories of this war, the ones that ‘…the victors often do not acknowledge’, and the ones that will be passed, long after the ‘victors’ have left, from generation to generation and perhaps some day becoming justifications for tomorrow’s acts of revenge.