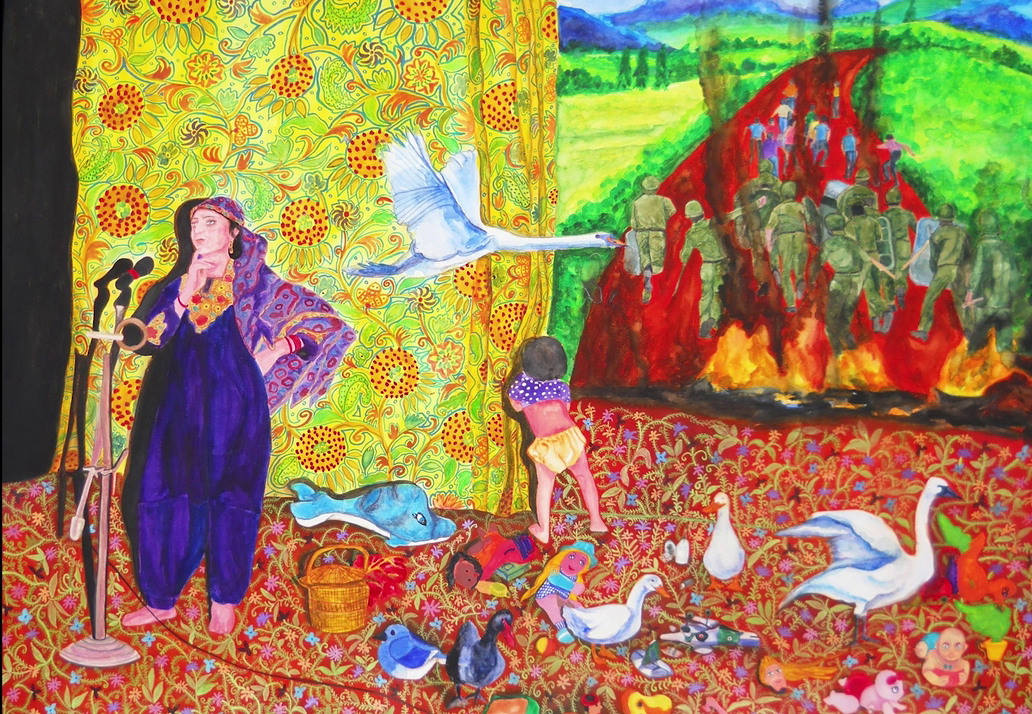 Uzma Falak is a poet, an essayist and a filmmaker from Kashmir. Her film, “Till then the roads carry her” has been screened among other places at the Open Frame Film Festival And Forum 2015, The 24th European Conference on South Asian Studies (University of Warsaw), and the South Asia Institute (University of Heidelberg). Integrating creative practice and research, she is currently pursuing her PhD at the AJK Mass Communication Research Centre, New Delhi.

Like some supremely beautiful woman, whose beauty is almost impersonal and above human desire, such was Kashmir in all its feminine beauty of river and valley, and lake and graceful trees.

Recorded rotten stereo sounds that play rape all over again

I am Nisara. The room was dark.
We were screaming for help
and struggling from the brutal attacks of the alcohol-smelling soldiers
rotten

I am Atiqa. It was a bleak, cold night.
They ransacked the house and came for me with very harsh blows.
They molested me in turns,
again

I am Raj Begam. I was gang raped by all the men in the room.
I heard in my state of faint senses, laughter and loud noises from the men
stereo sounds

I am Shahmal. I am a mother of four,
we all cried. They tore my clothes off me
and in the presence of my children, threw me on the floor and molested me
play rape

I am Zarifa. I was gagged, beaten up and raped.
I have my whole body hurting from cuts
recorded

I am Bakhti Begum. It was the dead of night.
They kicked the door open. They dragged the men from the house and molested us
all

Recorded rotten stereo sounds that play rape all over again

We are here to protect you
Ajeet Hain, Abheet Hain

My body defies your archive. My body is my memory.
Memory is an episteme.

Memory resides in our stoic stares,
in the gaze of their blood-shot eyes
in the defiance of our bodies
in the weight of their sovereign torsos
in the prayer on our lips,
our screams piercing heavens
in the stench of their alcohol breaths
in the persistence of our feet
in the sound of their boots and barrels
in the folds of our scarves and hems
in the gaud of their insignia,
certifying carte blanche

Memory is an inscription on our bodies and landscapes, sky and earth.
Memory is made of loss. Body is a memory of a thousand selves –
tortured, maimed, denied, raped, mutilated, frisked, humiliated.
Struggling. Resisting.

Memory is not a victim. Memory is a survivor,
an insurgent.

Wound is our memory. Our free country.
Memory is a wound.
…February 23, February 24, May 30, October 28, November 7…
Memory is its own witness. Indefatigable.

Memory is opposite of time,
an antonym of their preamble
memory is a synonym of our history
memory is our history,
refusing to settle as sediment.

Memory is home
till home is only a memory.

If we don’t listen to the cry of Wound,
will we forget and
‘forget that we have forgotten’?

Can exile exist without home as its referent?
Does loss slow down time?
Is poetry still possible?

I refuse decipherability to you
I shall remain forever indecipherable
And your rotten stereo sounds will play –
But what do ‘Kashmiris’ want?
All over again.

I do not protest. I reject you.

On the wintry night of 23-24 February 1991, an Indian army unit systematically executed a mass-rape in Kunan and Poshpor villages in north Kashmir’s Kopwor region. The army cordoned the villages, forced the men out of their houses and then took them into custody. The troops barged into houses under the guise of a search operation and raped the women. The two villages were barricaded for four days, which impeded the residents’ access to legal or medical aid. Survivors and human rights organizations report the number of raped women – between the ages of thirteen and eighty – to be over one hundred. While women were raped, the army tortured over one hundred men.

The Indian state has tried to cover up the evidence of the mass-rape and torture through its institutions such as courts and police, which are extensions of its militarist state in Kashmir. The Indian army, in order to wash its hands of culpability for the mass-rape sent its own team to investigate the mass-rape. The then chairman of Press Council of India, BG Verghese led the investigative team and reportedly visited the villages three months after the incident took place. The team concluded that charges against the Army were a ‘well-concocted bundle of fabricated lies’ and dismissed the case as a ‘massive hoax’. The committee also concluded that the medical evidence was worthless, that ‘such delayed medical examination proves nothing’ and that such abrasions are ‘common among the village folk in Kashmir.’

In 2014, during a hearing of the Kunan-Poshpor case, the army counsel called the statements of victims as stereotyped and ‘like recorded rotten stereo sounds that play rape all over again.’

Rape of a bride and her aunt in south of Srinagar, rape of ‘at least six and probably nine women’, including an eleven-year-old girl and a sixty-year-old woman in Chak Saidpur, double rape and murder of Aasiya and Neelofer in Shopian, the abduction, rape and torture of a young woman in Kulgam, or the rape carried out by an army major in Handwor of a 29-year-old woman and her 10-year-old daughter are a few among the numerous such incidents. The incidents of sexual violence and sexual coercion against men are equally horrific but remain grossly under-reported. If reported, such stories usually remain buried under the rubric of torture. Indian state has used institutionalised sexual violence as a weapon to quell the struggle for Kashmir’s liberation from Indian rule.

Portions of “Recorded Rotten Stereo Sounds, A Rape Survivor’s Testimonial” are based on testimonies of Kunan-Poshpur rape survivors and statements of army and other state apparatus. The story of Kunan and Poshpur shouldn’t only help us understand the workings of Indian state machinery, it’s multi-pronged and systematic occupational strategies and workings of other statist agencies and colonial projects, but also help us see the cornerstone of Kashmir’s culture — the culture of resistance.

The above essay
is a part of
Poetry/Fiction
Share