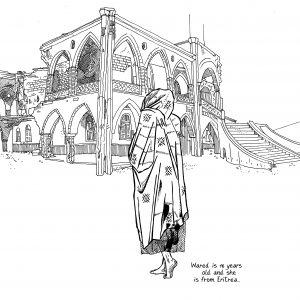 Representing conflict beyond the headlines: An excerpt of Libia

Gianluca Costantini is an activist and artist who for years fought his battles through the drawing. Censored on the web by the Turkish government, he angered many French readers for a short comic about Charlie Hebdo’s terrorist story. He actively collaborates with ActionAid, Amnesty, Cesvi, ARCI, Oxfam organizations. In 2017 he was nominated for the European Citizenship Awards. In 2019 he received the Art and Human Rights award from Amnesty International.

Francesca Mannocchi is a freelance journalist who covers migration and conflicts and contributes to numerous Italian and international newspapers (L’Espresso, Stern, Al Jazeera English, The Guardian, The Observer). She has produced reports in Syria, Iraq, Palestine, Libya, Lebanon, Afghanistan, Egypt and Turkey. She received the Premiolino award for journalism in 2016. She won the Giustolisi Prize with the Mission Impossible (LA7) investigation on migrant smuggling and Libyan prisons. In 2018 her documentary directed with the photographer Alessio Romenzi was presented at the 75th edition of the Venice International Film Festival. She is the author of Io Khaled vendo uomini e sono innocente (2019, Einaudi).

Libia is a graphic novel that springs from the collaboration between journalist Francesca Mannocchi and artist and activist Gianluca Costantini. The book combines in-depth investigative journalism with powerful and incisive images, delving into the complex intricacies of the Libyan conflict.

Published in Italian in October 2019 and followed a year later by a French edition, the graphic novel looks at the war in Libya from the point of view of the people whose lives have been upended by years of violence. This is perhaps one of the greatest contributions of the book: a change of scale, a narration of the war from the ground up. Libia casts aside the broad strokes of the geopolitical discourse and zooms in on people’s lived, daily experiences of war. Each chapter is centered around a person or a group of people providing a humanizing account of the struggles, pains and challenges glossed over by news reports.

This kind of counter-narrative is particularly significant from the vantage point of the Italian readership. Libya – and its war – mostly makes it to the news on Italian mainstream media for its legal (and mostly illegal) detention centers and human traffickers. In the populist imagination and loud propaganda, Libya is the country that opens the floodgates to the “invasion” of illegal immigrants threatening to swamp Europe and threaten its core identity values. This xenophobic and poisonous rhetoric conceals the realities of human suffering, exploitation, sacrifices as well as hopes and desires of those who are victims of war and of those who risk their lives to try and build a better future for themselves and their families.

Libia brings these people and these emotions to the forefront – and does so with a gentle, honest and empathetic touch.