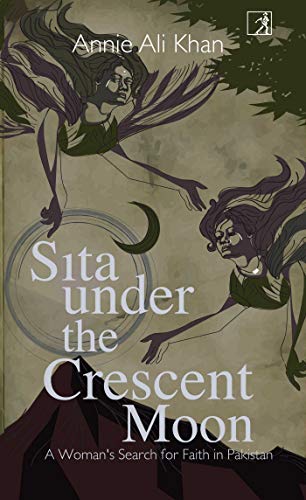 There is always something tragic about posthumous publications; the tragedy becomes incommensurable when the posthumous book is that of a dear friend.

The text published here with the title “Shivistan” is our way to pay a tribute to the work and life of Annie Ali Khan. The following is an excerpt fromher book Sita under the Crescent Moon. A Woman’s Search for Faith in Pakistanthat has been recently published by Simon & Schuster. The manuscript that Annie left behind was brought to life by the labour of love of Manan Ahmed Asif and Rajni George – to them goes our immense gratitude for being so truthful to Annie’s voice and for giving us the possibility to read such an important book.

Sita under the Crescent Moonis a book of personal quests, a book about the desire to search for the essence of life – about a search that in itself then becomes the essence of life. Sita under the Crescent Moon is a spiritual journey looking for female spirits and saints, looking for mythical women who become revered and glorified through their own immolation and annihilation. Annie became herself a pilgrim travelling along the women who showed her the way of a hidden mystical labyrinth across Pakistan, from Karachi to Sindh and Baluchistan. This community of women strives to preserve and nurture the memory of Sati – their name for Ramayana’s Sita –through inebriating rituals, dance, songs and legends. This feverish undertaking took Annie through a physically and politically hostile terrain, through mountains and deserts, through check-points and many visible and invisible layers of surveillance. She dared going where most would be too scared even to think about, driven by an all-consuming desire to bring out the voice of a female religiosity that is proactively pushed to the margins. Pakistan – or Pak-istan, the land-of-the-pure, as she would tongue-in-cheek spell it throughout the book – with its syncretic soul and repressive façade is at the heart of the narration. The women in the book, the women of Pak-istan, marginalised by patriarchy and by their social and economic circumstances, are ever resourceful and bound by the solidarity of a sorority that transcends all other denominations. Annie recognised herself in that sorority and was in turned welcomed in it with a womb-like embrace that accompanied her till the very end.

For those who knew Annie Ali Khan, Sita under the Crescent Moonis a way to hear her voice once again and hold on tight to her wide-eyed way of marvelling at this immensely contradicting existence. For everyone, the book, a monument of empathy and meticulous research, is a testament to a brave and humane writer, who was not capable or not willing to separate herself from the pain of the world.

A car ride later, the following morning, Naz and I arrived back in Dadu. From the gas station in the sleepy town, we took a mini-van to Sehwan Sharif. Forty-five minutes later, we spotted the golden-domed shrine. After renting a room for 700 rupees per night, we walked through the busy marketplace on our way to what seemed to my eyes to be the Mecca of the shrines of Sindh—the most popular tourist spot for spirit seekers, as well as those looking for a picturesque backdrop for romance. As a faqir smoking a joint in the courtyard put it, ‘Half the people here are lovers of the saint, the other half are here for love.’ Either way, Sehwan was pleasure central.

It was late afternoon on 4 November 2016, and at every beat of a heart, a drummer or two captured a crowd and at its centre a dhamaal. Naz and I walked into one such crowd. A young woman was beginning to go into raptures, her slender fingers weaving a dream in the air above her as her eyes rolled back. Then something inside of her shook, and she fell to the floor sobbing. ‘Don’t touch the girl,’ her mother called out from the edge of the circle.

The girl lay there, sobbing and trembling. The mother gave the girl some water and then, together with another woman, carried the girl away to the side of the courtyard. I looked at Naz and in the reflection of her teary eyes I found myself crying. Life was simply impossible.

The two drummers, Khalid Hussain and Ghulam Qadir, kept playing for the duration of the presence. One of the women in the dhamaal area danced. Though she was not possessed, she performed dhamaal for hours on end. Her murshid made her move, gave her feet rythm, she said. She came to Sehwan every month. She was there for the annual pilgrimage and the the ablution of the inner-sanctum. ‘My husband was born to my mother-in-law after a seven-year prayer to the Laal,’ she said.

‘Since she sat in meditation for him, she taught the child the name of Jhoolay Laal, until it was imprinted on his mind.’ She brought her son to Laal Shahbaz Qalandar’s shrine for seven years to offer prayers, and this dedication had made the woman a true devotee. The couple wanted to move permanently to a place near Sehwan. But there were no homes for sale.

I went looking for the sati. The rickshaw wallah Ghulam Sarwar lived in a village behind the hill where the serpent guarded over an oven that once fed thousands of Sufis breaking their fast during the month of Ramzan. Sarwar made a living ferrying visitors to the major sites of pilgrimage at Sehwan, including a visit to an enchanted garden called Laal Bagh and a city that was upside down. At a little distance from the shrine was a site where a serpent lived, turned to stone. ‘I make a simple living,’ he said.

Sarwar was seated next to the rock covered in a flaming red cloth. The story of the serpent and the feast was this. The serpent was the protector of a pit fire. The saint was in a forty- year-long meditation. It was the annual month of fasting and a great number of Sufis were coming. The saint ordered a quarter- pound of mixed flour to be cooked in the pit fire. This was enough to feed the hundred thousand Sufis. After the feast, the serpent appeared and the saint gave the serpent a piece of bread, and moved his hand over the serpent’s crown, and the serpent became the caretaker of the oven, turning to stone. In this landscape of graveyards was now a snake turned to stone and a miracle of feasting during droughts.

This serpent, Ghulam Sarwar said, was referenced in the famous qawwali sung by Madam Noor Jehan. The qawwali Ghulam Sarwar played in his rickshaw, as he travelled back and forth, two, three times daily, carrying visitors to this holiest of sites, this Shivistan, become Sehvistan, become Sehwan. ‘Go read Qalandar Nama and you will know history,’ he said.

Back at the shrine, I was roaming the courtyard, searching for the sati, when a woman called out to me. ‘Sit down here,’ she motioned to the floor before her. ‘Are you from the government?’ She wanted to know. ‘Who do you write for?’ She wanted me to write a report about ‘jadoo wallay’. Men with powers of black magic, she said, who came to the shrine to disrupt the spiritual powers of those with pure light, women like her. I was looking for the sati and I found a seeker on the path of light at Sehwan.

The men at the shrine, she said, were afraid she was going to expose their deception. She had no support. The police were quick to beat a thief, but her complaints at the police station about these black magicians had gone unheeded. It took her months of meditation to get her power up following her duties as a faqir at Laal Bagh—these men knocked it back down with the force of their impure thoughts. Sometimes they affected her power simply by their presence. No one believed her. The man she pointed to was either laughed off as mad or she was called crazy.

She was unmarried, she said. As a faqir, she had no relationship with her family. But she did go live with them from time to time. She wanted to go home, but she was unable to earn because her powers as a faqir were diminished by these men. ‘How can I beg when my heart is not in the right place?’ she said. ‘Maybe this is my fate,’ she added.

I thanked the woman, and after offering my prayers to Laal Shahbaz Qalandar, Naz and I prepared to head back to Hyderabad. As we rode the rickshaw to the bus stop, I noticed the shops where those heavy bottomed clay bowls were sold, like the one a woman in Kalri used to make chutney. I wanted to take a bowl back with me, but I had a long way to go. I made a mental note to get one on my next visit.

On 31 March 2018, I was back at Sehwan Sharif. My second visit, and the first visit since the bomb blast at Sehwan less than six months before. Walking past the metal detector, I exchanged greetings with the women attending security and made my way to the inner sanctum to say prayers to Qalandar. Back outside, making my way through the mostly empty bazaar, I did not see any clay pots. A shop seller said those clay bowls were not made anymore. One of the men selling dried nuts and fruits, mounds of berries on display, said I would have to place a special order— but I could purchase a similar bowl made in marble. Marble, like the paved tiles of the inner sanctum—once made of clay then wood then marble, a tomb. I hopped on the bus back to Karachi, empty handed.

As soon as the bus entered the limits of the city of Karachi, a man climbed on the bus on the women’s side, looking around at the passengers. The young bus conductor shouted at him.

‘You can’t just climb on, there are ladies here,’ he said. The man looked around and then left. An elderly man in the seat in front said to the young assistant conductor, ‘You should not have done that.’ That man, he said, was from the State’s clandestine agency, travelling in one of those cars which were used to get rid of people. He called him an ‘agency wallah’, an angel with the power to disappear men. The young bus conductor, with a bangle of faqiri around his wrist, shook his head.

Back in Karachi, at an old fisherman’s neighbourhood, I found a man selling the heavy bottomed clay bowl. The chutney I made, pounding and rotating the wooden ladle until my arm ached, was soul-stirringly delicious.