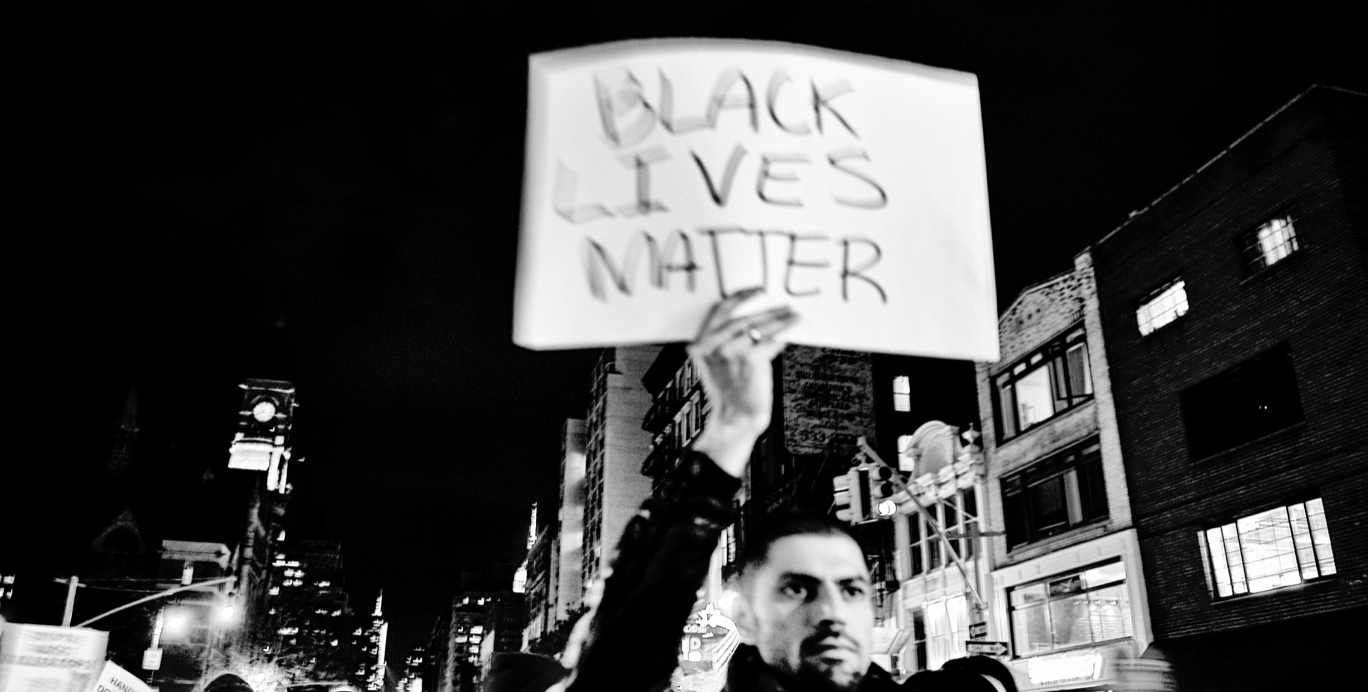 This article originally appeared on Deepa Iyer’s Medium page on 30 May 2020. Reproduced with permission.

Deepa Iyer is a Senior Advisor at Building Movement Project where she works on the SolidarityIs project. She’s also the author of We Too Sing America: South Asian, Arab, Muslim, and Sikh Immigrants Shape Our Multiracial Future.

Getting more South Asians to understand the importance of dismantling the systems of white supremacy is not easy, especially when we see images of Indians filling up a stadium in Houston in support of a Hindu nationalist leader or recognize that there are people from our own communities who actively support the current Trump administration despite its anti-immigrant policies.

For South Asians committed to ending state violence against Black people, it has always been clear that our work goes further, that we must also work to undo anti-Blackness within our own communities. The hard conversations with our parents and our uncles and aunties about white supremacy, anti-Black racism, and solidarity are not usually easy or fruitful.

But there are moments of clarity and windows of possibility.

Many people have now heard the story of the Gandhi Mahal Restaurant, located just three doors down from the 3rd precinct which was burned down on May 28th in Minneapolis (read the NY Times story here). The restaurant owners are Bangladeshi immigrants and they turned the Gandhi Mahal into a staging area for medics and a resting place for protesters dealing with tear gas during the uprising. According to the New York Times: “As wounds were bandaged and hands were held in the front room, [Ruhel Islam] was in the kitchen, preparing daal, basmati rice, and naan” for the protesters. Overnight, the fire from the 3rd precinct reached the Gandhi Mahal and it was severely damaged. Still, Mr. Islam said: “Let my building burn. Justice needs to be served.”

When I heard about the Gandhi Mahal restaurant, it reminded me of a conversation I had in 2014 with employees at the Ferguson Market & Liquor where 18-year-old Michael Brown stopped before his murder at the hands of Darren Wilson, a police officer. An Indian worker I spoke with there expressed similar support for protesters and criticized the discriminatory policing he regularly observed, noting that “the real problem is with cops who stop African-Americans.” In an interview with India Abroad, Anil Gopal, the president of the St. Louis Asian Indian Business Association and a 21-year resident of Ferguson said that “a lot of black people came to help the (desi) community. They came out in droves to help clean up the neighborhood and helped the victims clean up their stores. Some of them even kept vigil outside the store as long as they could to protect the stores.”

These may be small and rare parts of the bigger story around police brutality targeting Black people in this country, but for South Asians, they are meaningful and significant. These stories remind us that it is possible to build bridges, to understand the systemic failures of policing in this country, and to fight for justice for Black lives. While these stories don’t reflect the experiences of every desi shop owner in this country, they do provide an alternative to the narrative we often hear: that South Asians and Black communities do not have a common cause and that immigrant business owners do not care about Black customers and residents. Mr. Islam, who said he grew up in a “traumatic police state” in Bangladesh, understood the anger and frustrations of Black people. The Indian store clerk I spoke with in Ferguson understood the class and race connections between communities of color.

More broadly, these stories, even with the complexities underlying them, reflect the foundations of solidarity practice: centering those most affected by inequality, understanding that the systems, institutions, and policies of white supremacy target us all, and taking steps to support and co-conspire for shared liberation.

For those South Asians who are privileged by virtue of class, caste, or immigration status, the stories of South Asian shop owners in Minneapolis and Ferguson may not resonate. Many South Asians take the “racial bribe” and climb the racial ladder in a futile attempt to reach the status of whiteness. They are the ones calling protesters “looters” and differentiating themselves as model minorities. Still, others remain indifferent to understanding the history of Black liberation struggles that paved the way for their own families to immigrate and enjoy benefits in America. Some are silent and apathetic, seemingly oblivious to the civil unrest happening around them. Getting more South Asians to understand the importance of dismantling the systems of white supremacy is not easy, especially when we see images of Indians filling up a stadium in Houston in support of a Hindu nationalist leader or recognize that there are people from our own communities who actively support the current Administration despite its anti-immigrant policies.

But that doesn’t mean we can stop. We must continue to amplify the importance of solidarity with Black communities and undo anti-Blackness within our own people. That means explaining how white supremacy and racism are devastating to all people of color including South Asians. It means acknowledging that the full liberation of Black communities leads to the freedom of all people. It means explaining that when we perpetuate anti-Blackness, that we are being complicit ourselves in reinforcing systems of oppression that harm our own people too. And it means coming from a place of love and compassion.

We must keep trying, and we can look to the stories of Minneapolis and Ferguson shop owners as starting points and inspiration.

Below are 10 action steps that South Asians can take:

Step 1: Donate to help protesters get out of jail around the country with bail funds > https://www.communityjusticeexchange.org/national-bail-fund-network. Then, donate to Black-led organizations in your area and to South Asian and Asian American organizations with an explicit commitment to being in solidarity with Black communities. Every dollar does count.

Step 2: Show up safely on real streets or coordinate South Asian solidarity actions on digital streets. With digital conversations, plan an agenda to discuss: “How can South Asians show up for Black lives?” Discuss using the guides in Step 4, and then come up with a plan of action with 1 individual action + 3 collective steps (examples: deepen my own analysis and share it; support a local group; commit to 2 community conversations; ask a place of worship or cultural group to make a statement of solidarity).

Step 3. Sign a letter of solidarity (for Asian American groups and individuals) organized by the Coalition of Asian American Leaders (CAAL) in Minnesota > https://caalmn.org/api4georgefloyd/.

Step 4: Learn about South Asian communities and the imperative for building solidarity with Black communities.

>For post 9/11 analysis on solidarity with Black communities: read a chapter from my book, We Too Sing America, called “Ferguson is Everywhere” that provides community stories along with a framework for discussions and political education (link).

> Check out Anirvan Chatterjee’s The Secret History of South Asian and African American Solidarity for historical examples of cross-racial solidarity.

>For courageous conversations with family, use this guide with exercises developed by the Queer South Asian National Network (link).

Step 5. Take a stand. Share your commitment to dismantling anti-Black racism and the demands of Black communities (step 7) with friends, networks, and on social media.

Step 6. Then ask others to take a stand. Ask your networks, organizations, places of worship, and campus groups to make solidarity statements. Check out @SouthAsians4BlackLives on Instagram for visuals and messages.

Step 7: Understand and Support the Demands from Black Communities. Insist on investments in communities and divestment from law enforcement. Here’s a report from MPD_150 (link) and a mini-syllabus on prison & police abolition (link). You can take an Abolition in Policing workshop from Critical Resistance here, and see demands from Color of Change (link) that address use-of-force, profit motives in policing and more in the wake of the murders of Ahmaud Arbery, George Floyd, Tony McDade, Sean Reed, and Breonna Taylor.

Step 9. Ensure that South Asian solidarity struggles also include confronting casteism, Hindutva, and Islamophobia. Learn more from South Asian groups here and read about caste abolition from Equality Labs here. In fact, in communities advocated for the passage of a city council resolution in St. Paul against the human rights violations in India (link).

Step 10. When the urgency stops, don’t stop acting: Dismantling white supremacy is a long-term commitment. Even when it’s not on the news, we need to show up for each other. Practice self-care and community care, and build your daily plan for transformative solidarity.