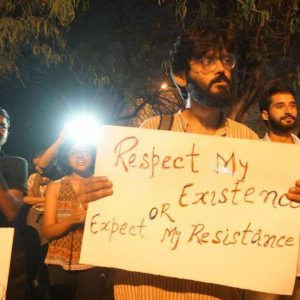 The commitment to fight Islamophobia and promote equal citizenship: A portrait of Sharjeel Imam

In collaboration with maraa, The Polis Project launched Profiles of Dissent — a new series centered on remarkable voices of dissent and courage in India and their personal and political histories, as a way to reclaim our public spaces. These are prominent writers, poets, activists, and human rights defenders who have been in prison, held under the Unlawful Activities (Prevention) Act. The profile features Sharjeel Imam, a student leader, who has been accused of inciting violence during the Delhi pogroms in February 2020.

Tazeen Junaid is an activist based in Aligarh and writes on issues of gender equity, Indian minorities and the anti-CAA movement. She is currently pursuing her Bachelors in Literature from Aligarh Muslim University.

Sharjeel Imam, 32, is a research scholar at India’s Jawaharlal Nehru University (JNU). He grew up in Kako, a village in the Jehanabad district of Bihar. His father’s struggle to secure Muslim representation by organizing them as electoral forces made him conscious of the injustices meted out to minorities in India. Imam is an alumnus of the Bombay Indian Institutes of Technology (IIT), where he was the only Muslim in his class and a constant target of Islamophobia. After working as a Teaching Assistant in IIT Bombay, as a programmer at the IT University of Copenhagen, and as an engineer at Juniper Networks, Imam decided to pursue further education. He enrolled in a Masters’ program in Modern History at JNU in 2013, then pursued an M.Phil. in Modern Indian History and in 2017 started his thesis titled Exodus before Partition: The Attack on Muslims of Bihar in 1946.

Imam has been involved in student activism since 2013 when he joined the left-wing student organization All India Students’ Association (AISA). He left AISA on grounds of Islamophobia that he denounced in an article stating: “The Qur’an is seen by some comrades as a ‘defected’ book which leads to terrorism among Muslims. The Muslims are regularly painted as uniquely misogynistic by many comrades. And there is a healthy propagation of anti-Islamic fake news, and ‘fatwas’ which are hardly ever fatwas.” In 2018 he founded the Eqbal Ahmad Study Circle where he articulated an idea of politics unconfined by ideological binaries and polarization.

On 15 December, Imam, along with Aasif Mujtaba, MSJ, and Students of Jamia members, exited a mosque in Okhla when a crowd of people from Okhla and Shaheen Bagh approached them, raised Imam on their shoulders, gave him a mike, and asked: “What do we do now?” and he answered: “Chakka Jaam.” They joined the crowd, proceeded to blockade the six-lane highway of Kalindi Kunj, and started the Chakka Jaam at Shaheen Bagh, which later came to be known as Shaheen Bagh protest. A local politician wanted to remove the blockade and organize a march the next day, but Imam disagreed, defining marches as unproductive protests. The Chakka Jaam continued and, on the first night, unidentified people pelted stones at the Police, which Imam tried to stop. Imam became one of the main minds behind the anti-CAA movement at the Shaheen Bagh protest. He routinely advocated avoiding political organizations and stressed on the organic growth of the movement. He refused monetary donations to the protest site and insisted that all donations should be made in kind. He formed the Shaheen Bagh Coordination Committee to avoid political lobbying and continued advocating Chakka Jaam as the sole effective means of protesting. This practice was since adopted in every protest site of the anti-CAA movement.

Charges: Sharjeel Imam has been named in First Information Reports (FIRs) filed by five Indian states – Arunachal Pradesh, Assam, Delhi, Manipur, and Uttar Pradesh – for giving speeches at AMU and Jamia Millia Islamia. He was also booked under several sections of the Unlawful Activities Prevention Act and, among others, under Sections 120B (Criminal conspiracy), 121A (Conspiracy to commit offences of waging war against India), 124A (Sedition), and 505 (Statements conducing to public mischief) of Indian Penal Code. He has been given bail by Arunachal Pradesh and Assam while Manipur is yet to initiate any official proceedings.

Updates: Imam’s petition to club the FIRs registered against him by five states and to have them investigated by a single agency was last heard by Supreme Court on 19 June 2020. On 25 June, with his jail inmates in Assam, he went on a two-day hunger strike demanding the release of peasant leader Akhil Gogoi. In July, he was charged with inciting the February 2020 Delhi pogrom, which took place while he was lodged in Guwahati jail. In the same month, Imam also tested positive to COVID-19. In August, his custody was transferred to Delhi Police. On 17 September, he was produced before the Aligarh Court without informing his family and legal counsel. He was remanded to 14 days of judicial custody and remains incarcerated in Tihar Jail.

Update 1 October 2020: A Delhi Court extended Imam’s judicial custody till 22 October as the previous term had expired. His legal counsel opposed the extension by stating Imam’s declaration: “Never have I understood why I am in the case.” He has not been named in the chargesheet of the February 2020 Delhi Pogrom despite being charged for it on 25 August. The Police claimed that Imam has been radicalized by reading the book Forms of Collective Violence: Riots, Pogroms, and Genocide in Modern India written by Paul Brass, a Professor Emeritus at the University of Washington.

The following is a transcription of the 2-minute clip of Sharjeel Imam’s speech at AMU on 16 January, which was broadcasted by right-wing news channels portraying him as an Islamic fundamentalist pushing a secessionist agenda.

In Delhi, we have attempted to assemble a crowd in which non-Muslims chant Nara-e-Takbeer with us and stand there on our terms. If they are unwilling to accept our terms, then they are using us and our crowd, which is what they have done for the past 70 years. This is the time to tell non-Muslims ‘If you are our sympathizers, stand with us on our terms.’ If they can’t stand with us on our terms, they are not our sympathizers. There was this aspect and secondly, I saw in Bihar, I will give you the example of Bihar. A lot of rallies have happened there. There’s a big rally every day. Look at Kanhaiya’s rally – five lakh people were in that rally in Araria. The problem with these rallies is just, I have said this before if we have 5 lakh people organized, we can permanently cut-off [blockade] India from North East and if not on a permanent basis then at least for one month. Put so much rubble on railway tracks and roads that it will take them [government agencies] at least more than a month to remove it. Let them go by the air force. It is our duty to blockade Assam. Assam and India get divided by the blockade, only then they will listen to us. You know the situation of Assamese Muslims. CAA NRC has been implemented there, people are being put into detention camps, and genocide is taking place over there. We will get to know after 6-8 months that every Bengali, whether Muslim or Hindu, has been killed. If we want to help Assam, we need to blockade the road leading to Assam for the Indian military and its supplies. Blockade it. We can blockade it because the Chicken Neck corridor (the only road connecting India and Assam) is a Muslim-majority area. Leaders like Kanhaiya Kumar sing slogans of the revolution, take photos and leave. The crowd will be ours and the faces theirs, and nothing productive has ever resulted from these protests. Remember that common people are angry. The responsibility of using this anger in a productive manner lies with politicians, scholars, and journalists rather than waste it in photo sessions. One other thing I came to understand is that till now sensitization is not in our control. It is in the control of those who worship the Indian nation, whether it is the left or the congress. It will come in our control if we set up a group of Muslim scholars.