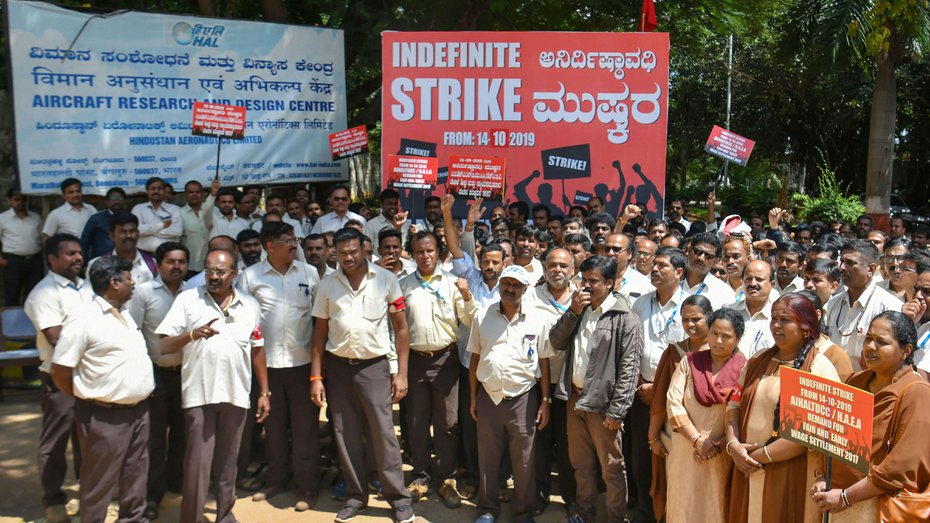 The HAL Workers Strike: An Explainer

Kanishka Raj Singh is a Bengaluru based journalist.

Thousands of workers in India’s state-owned aerospace and defense company Hindustan Aeronautics Ltd (HAL) have been on a strike since 14 October 2019 over various unfulfilled worker demands, including higher wages, in a continuing trend of unrest among employees in state-owned companies across the country. On 22 October the Karnataka High Court directed the workers to call off their strike.
At a time when India’s economic growth is not peaking, and its unemployment rate has risen to a near 45-year high, the latest strikes at HAL come as an additional burden on the government.
The workers’ protest at HAL began on October 14 as a coordinated and concerted effort at various company’s sites in Bengaluru, Hyderabad, Korwa, Koraput, Nashik, Kanpur and Lucknow. The exact number of workers participating in the strikes across cities could not be ascertained, but local media reports have suggested that most of HAL’s 20,000 workforce is on strike with only a “skeletal staff” currently working.

The General Secretary of the All India HAL Trade Unions Coordination Committee (AIHALTUCC), S. Chandrashekhar, has stated that the Union had served a notice to the HAL management on 30 September 2019. However, since all negotiations with the management had ended in a stalemate, workers from nine facilities had decided to go on an indefinite strike.

The company reported a near 8% increase in its 2018-19 turnover, which rose to $2.77 billion, an all-time high figure for HAL, its annual earnings statement showed. The annual profit before tax rose about 15% to $321.05 million, according to the statement released in May. The state-owned company reported a quarterly net profit of $79.49 million, a year over year increase of about 63%, according to its most recently released quarterly results for the period ending June 30.

HAL said earlier this month that estimated loss on the company’s production operations after its Trade Unions had given the notice of the strikes has not yet been assessed.

What has led to the HAL strikes?

The workers could be heard chanting: “Down down management, down down management” in chorus. There have been no reports of violence, misbehavior, abuse, chaos and traffic disruption thus far. However, there is an evident sense of offense from the workers on strike towards those members of staff who are continuing to work at HAL and have not joined the protests.

“Shame, Shame on you,” the protesting workers outside the gate of HAL’s Bengaluru facility were heard shouting as colleagues not joining the strikes passed through the facility’s gate. The management at the company has termed the strikes “illegal” and accused the Unions of showing a “total disregard” to the firm.

The workers on strike are demanding that they get a raise equal to HAL’s officers, who enjoy a 15% rise in basic pay and a 35% increase in perks, according to claims made by workers reported in The News Minute. The company has called the demand baseless, stating that they tried to arrive at a solution in nearly a dozen round of negotiations with the Unions, with the latest talks occurring two days before the strikes began.

“There is no justification and rationale in the demand of the Unions to extend the benefits (fitment benefit and allowances) on par or more than executives, when salary revision of executives was effected from January 1, 2017 after stipulated 10 year period. The increase in respect of officers with effect from January 1, 2017 needs to be compared with the base of January 1, 2007. On the other hand, workmen have two wage revisions of five years periodicity during the same span”, HAL had said.

However, the protesting workers have labeled the statement as a form of manipulation alleging that there was only a single wage revision, which was implemented in two parts as opposed to two revisions as claimed by the company.

“It’s like dividing one wage revision of rupees 10 into two equal parts, one applicable in 2007 and the next in 2012. But the management is portraying matters as though we got two full wage revisions, which is a blatant lie,” the general secretary of the HAL employees’ Union told local media. The protesters have said the strikes will continue till their wages are revised.

Does HAL workers’ protest fit into a larger pattern?

All India Unions and Associations of Bharat Sanchar Nigam Limited (AUAB)’s Convenor P. Abhimanyu has stated: “Government owes BSNL huge amount of money. They have also collected excess amount of around Rs 400 crore ($56.27 million) per year from BSNL since 2007 in the name of pension contribution. This time we will start agitation across the country against the government. If the Department of Telecom clears dues of BSNL – both vendor payments and salary can be given on time”.

The workers also do not want the two companies to be merged, as is suggested by reports saying that the Department of Telecommunications is considering a merger to rescue the sick units.
The announcement of the step is seen by the Bank Employees Federation of India as a “prelude to privatization” and has increased the fear of layoffs and job losses in the pursuit of “efficiency.” Indian state-run banks have also seen protests and strikes over concerns related to their working environment, including high levels of stress caused by professional targets and overtime duties.
In the case of debt-laden state-run carrier Air India, a July report stated that by October 2019 the company would not have enough money to pay salaries. In March 2018, the government of India tried to but could not find a buyer. Earlier this month, 120 pilots resigned in protest as they felt their demands for raising salaries and promotions weren’t met. The Air Corporation Employees Union sees the full divestment of the company as a political move.

Employees at the Telangana State Road Transport Corporation, a state-owned transport service provider in the Indian State of Telangana, have also been on strike since 5 October 2019. The company has been directed by the State’s High Court to pay employees’ salaries by October 21.

Finally, ordnance workers began a strike on 20 August 2019 against the corporatization of ordnance factories. The strike was called off four days later. However, 80,000 ordnance workers are said to be considering striking again as they do not want the sector restructured which could adversely affect their employee rights.

How are the HAL protests going thus far?

The attendance at the protests is only confined to the workers of the company and does not seem to attract any support from the larger public that can be seen going about their own lives as the HAL workforce sits roadside outside the gates of the company’s facilities. Attention from the Indian media is coming, though it remains limited to new, emerging and online forms of media. In the case of established media houses, the coverage is confined to a small portion of their news website or to a column deep inside a newspaper or to a brief segment on television. Recent weeks in the Indian media have seen large scale coverage related to The lack of front-page newspaper coverage or prime-time hours of news channels is not helping the cause of the protests. Some workers at the protest site in Bengaluru seemed upset at not getting the type of media coverage they think this issue deserves.

The above essay
is a part of
Explainer
Share

BY Watch the State

Why Dilli Chalo? Understanding the agriculture reform bills that are causing a stir