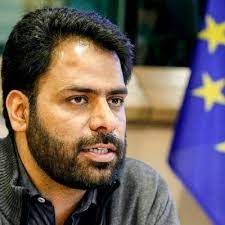 Francesca Recchia, a researcher and writer and former director of the Institute for Afghan Arts and Architecture, is the editor and creative director of The Polis Project.

Suchitra Vijayan is a barrister, researcher and the author of “Midnight’s Borders: A People’s History of Modern India.” She is the executive director of the Polis Project.

In this essay, Suchitra Vijayan and Francesca Recchia explore the political circumstance that led to the incarceration of Kashmiri human rights activist Khurram Parvez and what that means for the state of civil rights in the country.

On 22 November, the Indian National Investigation Agency (NIA) arrested Khurram Parvez, an internationally renowned and well respected Human Rights defender from Kashmir, after raiding for more than 14 hours his residency and the offices of the Jammu and Kashmir Coalition for Civil Society (JKCCS). Parvez, who received the prestigious 2006 Reebok International Human Rights Award, is one of the founding members and the program coordinator of JKCCS, a nemesis of the Indian State for their relentless work in denouncing human rights abuses in Kashmir. He is also Chairperson of Asian Federation against Involuntary Disappearances (AFAD) that campaigns against enforced disappearances.

The news of the arrest spread quickly and sparked a wave of international outrage, with international rights bodies demanding his immediate release. The Observatory for the Protection of Human Rights Defenders, a partnership of the World Organisation Against Torture (OMCT) and the International Federation for Human Rights in a joint communique defined Khurram Parvez’s  an “arbitrary detention” and a case of “judicial harassment” and expressed the “utmost concern over the high risk of torture and ill-treatment he faces while in custody.”

Mary Lawlor, the UN Special Rapporteur on Human Rights Defenders, in a tweet about Parvez’s terrorist-related charges declared: “He’s not a terrorist, he’s a Human Rights Defender.” When the distinction between terrorists and human rights defenders needs to be spelled out loud, many questions arise on the nature and the intentions of the State that meddles in such narratives.

This is not the first time that the Indian State goes after Khurram Parvez. The JKCCS were raided in October 2020 and on 14 September 2016 he was prevented from boarding a flight from Delhi to Geneva, where he was invited to address the United Nations Human Rights Council. Two days later, he was arrested from his house in Srinagar by the Jammu and Kashmir Police and released after four days. As soon as he was released, Parvez was arrested again outside the gates of the jail. He was then detained with an oral notification under the Jammu and Kashmir Public Safety Act, 1978. After two and a half months after the initial arrest, the Jammu and Kashmir High Court deemed his detention illegal and highlighted the arbitrariness and the abuse of power of the District Magistrate who oversaw the arrest.

Many political commentators saw an uncanny timing in the recent raid on JKCCS given the current political climate in India.

In mid-November, the National Security Advisor (NSA) Ajit Doval in an address to the cadets of the Sardar Vallabhai Patel National Police Academy in Hyderabad called civil society “the fourth generation warfare.” As wars are too expensive and ineffective, “it is the civil society that can be subverted, suborned, divided, manipulated to hurt the interests of a nation. You are there to see they stand fully protected.” As the NSA turns civil society into a battleground, citizens inevitably become enemies worth hunting down. Can a state that wages war against civil society still be called a democracy?

This official declaration of absolute impunity ends up almost validating the systematic abuses committed by the Armed Forces in Kashmir. The latest of a long list include the use of civilians as human shields in what was officially described as a counter insurgency operation or the “encounter” in Hyderpora, Srinagar, where the Police claimed to have killed three foreign militants and buried them quickly while the families contested the cold blood murder and demanded the return of the bodies.

Khurram Parvez and JKCCS have never minced words and always openly confronted such brutality. The latest assault against them seems therefore to be part of a systematic and deliberate targeting of all those who dare to call out the abuses of power and the excesses of violence perpetrated by the Indian State and its agencies.

The application in the arrest of Khurram Parvez of the UAPA is particularly telling. Initially conceived as an emergency law, the statute leaves to the authorities an ample margin of unchecked discretion in the name of national security. It is a lawless law, aimed at criminalizing dissent and curbing fundamental rights and liberties. Recent amendments to the law, made  in August 2019, give the Indian State the power to unilaterally charge organizations as well as individuals as terrorists without any evidence. Any person charged under UAPA can be jailed for up to seven years without trial.

Kashmir is the most militarized region in the world. For a long time, India has targeted and treated Kashmiri civilians as prisoners of the State. Over the years, the legal and administrative systems have put in place a vast infrastructure of impunity – extrajudicial murders, torture, illegal arrests and forced disappearances that far exceed the limits of the law. Prof Haley Duschinski argues that “denial and cover-up that are built into the legal systems that claim to protect the rights and interests of Kashmiris.”

In Kashmir, the draconian UAPA terrors law has become a lethal weapon to silence and intimidate: anyone can be arrested and disappeared indefinitely without any formal records. The absence of due process or official records makes it impossible to pursue any form of legal remedy. Since the abrogation of Article 370, there has been an increase in civilian arrests and deaths at the hands of the State.

Given the long history of violence and occupation in the region, activists like Khurram Parvez, and institutions like JKCCS have not only consistently challenged the institutionalized denial of justice, but have also become the keepers of records and documents that can help hold the Indian State accountable.

India has become a Republic of Fear. In the face of constant assault on the rights, freedom and dignity of the Kashmiri people, the simple act of documenting everyday violence has become an act of sedition.