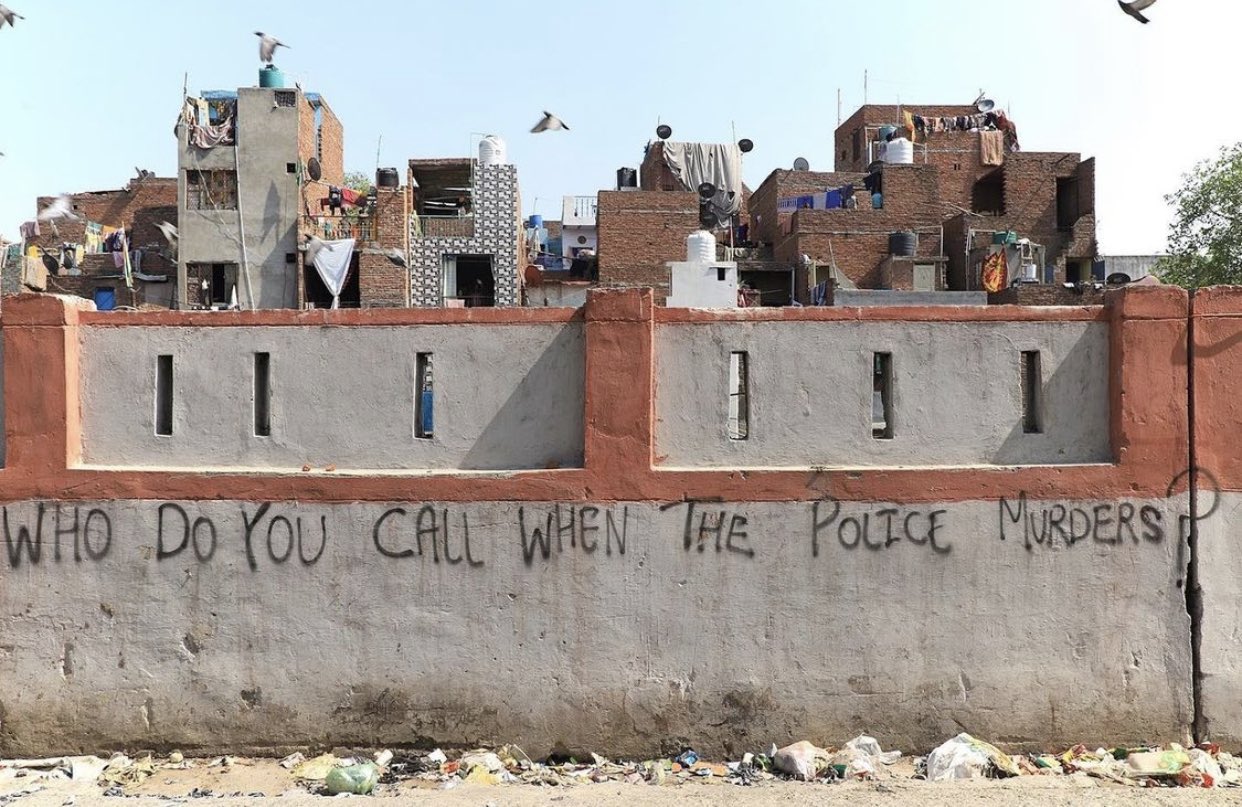 Francesca Recchia, a researcher and writer and former director of the Institute for Afghan Arts and Architecture, is the editor and creative director of The Polis Project.

Suchitra Vijayan is a barrister, researcher and the author of Midnight’s Borders: A People’s History of Modern India. She is the executive director of the Polis Project.

The Polis Project leadership reflects on the attack on Afreen Fatima’s family and the Indian Muslim community at large.

The photograph used is courtesy of Shahid Tantray and The Caravan Magazine.

On Friday 10 June 2022, the Muslim community across India took to the streets in large numbers to demand action against Nupur Sharma and Naveen Jindal – respectively, the former Bharatiya Janata Party (BJP) spokesperson and the former head of the Delhi BJP’s media unit – for their derogatory remarks against Prophet Mohammad. While both party leaders were characterized as “fringe elements” and suspended from the BJP, no legal action was taken against them. Sharma’s insults are not new: BJP members, including Prime Minister Modi, have often targeted, vilified, spread disinformation and used hate speech to unleash violence against the Muslim community.

As protests grew in intensity, especially in Northern India, so did the response of the Police that intervened against protestors using disproportionate and unjustified violence. Some public demonstrations were dispersed with lathi charges; in Ranchi, however, what authorities defined as “mob control” ended with two youth, 14-year-old Mudasir and 19-year-old Sahil Ansari, killed by the Police that shot live ammunition against the protesting crowd. Zafar Aafaq reports that Mudasir was shot in the head and died in hospital, while Sahil was hit in the back while returning home from Friday prayers.  According to Maktoob Media, 18 others were seriously injured – including Afsar Alam, who has six bullet wounds. Ground reports state that the Police attacked the Muslims and violence was “pre-planned” while the Hindu groups that initially fired at the protestors were not apprehended.

The killing of the two teenagers sparked outrage on social media from the ranks of those who are critical of the government and Communist leader Dipankar Bhattacharya lamented in a tweet: “We see no action from the Indian state against Islamophobic hate speeches, but protesting teenagers like Mudassir and Afsar (sic) are being gunned down on the streets in the name of ‘crowd control’. We condemn these police brutalities and appeal to all to maintain peace and harmony.”

As Police deployed unmitigated violence, with senior officers cheering at the spectacle, authorities used the protests as a new opportunity to further crackdown on dissent. Scores of activists and political dissidents – many of whom were active in organizing anti-CAA protests in Allahabad – have been picked up under false charges. This playbook is not new. Since the pro-democracy anti-CAA protest in 2019, the Indian State has manufactured evidence against activists and student leaders, arrested them under false charges, denied bail and in many cases even medical help. However, the real perpetrators of the Delhi violence, including the BJP politicians who incited violence through hate speech, remain free.

In this latest round-up, according to data shared by the Police with Zafar Aafaq, “48 people have been arrested in Saharanpur, 68 in Prayagraj, 50 in Hathras, 25 in Moradabad, eight in Ferozabad and 28 in Ambedkarnagar.” The number of those who are currently in custody, however, continues to grow.

Among those named as “key conspirators” are Welfare Party leader Javed Mohammad, his wife Parveen and daughter Sumaiya (19), who are the parents and younger sister of scholar and student activist Afreen Fatima – leader of the Aligarh Muslim University and the Jawaharlal Nehru University Students Union, national secretary of the Fraternity Movement and currently associated as a researcher at The Polis Project. Afreen Fatima, who is an articulate, honest and vocal critic of the current regime, became widely known during the anti-Citizen Amendment Act (CAA) movement that swept the country in 2019 and 2020. Since then, Fatima has been the target of systematic harassment, including being “auctioned on sale” on the Sulli Deal online platform after repeated public calls for Hindu men to abduct Muslim women.

In a video message published by Maktoob Media, Afreen Fatima describes how the Police arrested her family members in the middle of the night without being in possession of any warrant or legal notice and, when she and her sister in law refused to follow the policemen to the police station, the Police threatened them to take them by force. While her mother and sister have been able to communicate with lawyers and activists, there is at the time of writing no clarity on where her father has been taken.

The Police further threatened Fatima to evict them and raze their house to the ground. On the evening of 11 June, they were issued a demolition notice for the following day and residents were asked to empty the houses to proceed with the demolition. The authorities, accompanied by a large number of Police personnel in riot gear, destroyed Afreen Fatima’s home in the early afternoon of 12 June even though many elements of the legal notice to allow the demolition proved to be either false or factually wrong.

While there is neither constitutional grounds nor moral rationale to justify the destruction of people’s homes, this has become a frequent measure that local administrations implement with the complicity of the Police to punish dissenters, activists and political opponents. In this systematic form of “bulldozer justice,” the BJP has become a champion of entrenching illegality and mob justice by practice in contravention of the Indian Constitution and its founding principles.

In April 2020, the Supreme Court issued a stay order against the demolition of homes and properties of alleged rioters; this, however, did not fully stop the demolitions, nor did it work as a legal precedent to prevent the use of this measure that is de facto a form of collective punishment. As the recent historical record shows, this is a punitive practice that in India is directed almost exclusively at Muslims. In her statement, Afreen Fatima affirms that along with hers, many other Muslim families were threatened to have their homes bulldozed and videos emerged on social media of the demolition of the properties of Muslim citizens accused to have taken part in the protests. Bulldozing homes is a well-honed weapon of state terror deployed by Israel: the Indian state has borrowed it, first implemented it in Kashmir and is now making full use of it in mainland India.

By international standards, collective punishments are considered war crimes. The events of the last days – along with public calls for rape and murder, economic boycott of Muslim businesses, evictions and bulldozing campaigns – are nothing short of the tangible proof that the current Indian Government is openly at war with its Muslim citizens.

In India, over 200 million Muslims are  constantly targeted with physical and mental violence, harassment and abuse to the point that in February 2022, Gregory Stanton – the founding director of Genocide Watch – said during a US congressional briefing: ​​“We are warning that genocide could very well happen in India.”

Watch the State (WTS), the research wing of The Polis Project, has worked since 2019 to document and analyze patterns of state violence in India. Through a database of individual instances of violence assembled over the years, WTS corroborates the connivance and complicity of all state agencies to establish India as an authoritarian, ethno-nationalist state.

Hindu Rashtra no longer looms as a threat, but is established as an inescapable reality. Living in a permanent state of fear, minorities in India are witnessing a rapid erosion of their fundamental rights,  promises of constitutional protection and equal citizenship.

Evidence gathered by WTS shows that India is swiftly being remade into a aparthied state, as defined by the Rome Statute, where  “inhumane acts [… are] committed in the context of an institutionalized regime of systematic oppression and domination by one racial group over any other racial group or groups and committed with the intention of maintaining that regime.”

The Indian judiciary has not only failed to arrest the government’s authoritarian tendencies, its unjust and repressive acts, but also in many cases it has aided it. For every opponent of the status quo, the judiciary acts whimsically and arbitrarily, the Law is trampled, legal guarantees are suspended, basic rights are questioned and the Police acts a vindictive force.

In a video posted and then deleted, Shalabh Mani Tripathi, a BJP politician and former media advisor to Yogi Adityanath – the Chief Minister of Uttar Pradesh (UP) – recorded policemen beating with sticks young Muslim boys who were detained for protesting against Nupur Sharma’s remarks. In a later comment, he praised the Police for the “return gift to the rebels.” Similar other extremist voices joined in to commend such use of violence as acts of bravery and wishing the use of stronger sticks to notch down the protesters’ arrogance.

It has now become common practice for the Police to take and share videos of custodial violence. While these recordings should function as visual evidence of their atrocities, the Police act with impunity as they are confident that they would not face any legal consequences. These videos of violence have instead a chilling effects and are circulated to galvanize Hindu extremists and terrorize marginalized communities.

When state instituions have become a willing arm of oppression and authorities deem legitimate to thrash people as they “appear to be Muslims,” carry out extra-judicial punishments and bulldoze houses to instill terror and silence voices of dissent, continuing to define India as a democracy becomes a farce.

In such a climate of elation for the violence meted out against minorities and dissenters, the margins of hope for justice dramatically shrink. There can be no moral arc of justice in the age of absolute tyranny. So, in India stating facts can hurt Hindu religious sentiments and unleash state-sponsored violence. Yet consistent attacks on minorities are always characterized as an exception orchestrated by the fringe. This is, however, majoritarian terror that acts as the judge, the jury and the executioner.

As the Muslim community fall pray to growing fear for it is abandoned and proactively persecuted by the very institutions that were meant to protect them, Muslim activist Sharjeel Usmani demands to know: Who do we call when police murders?

There is no reconciliation without justice: The case of The Gambia