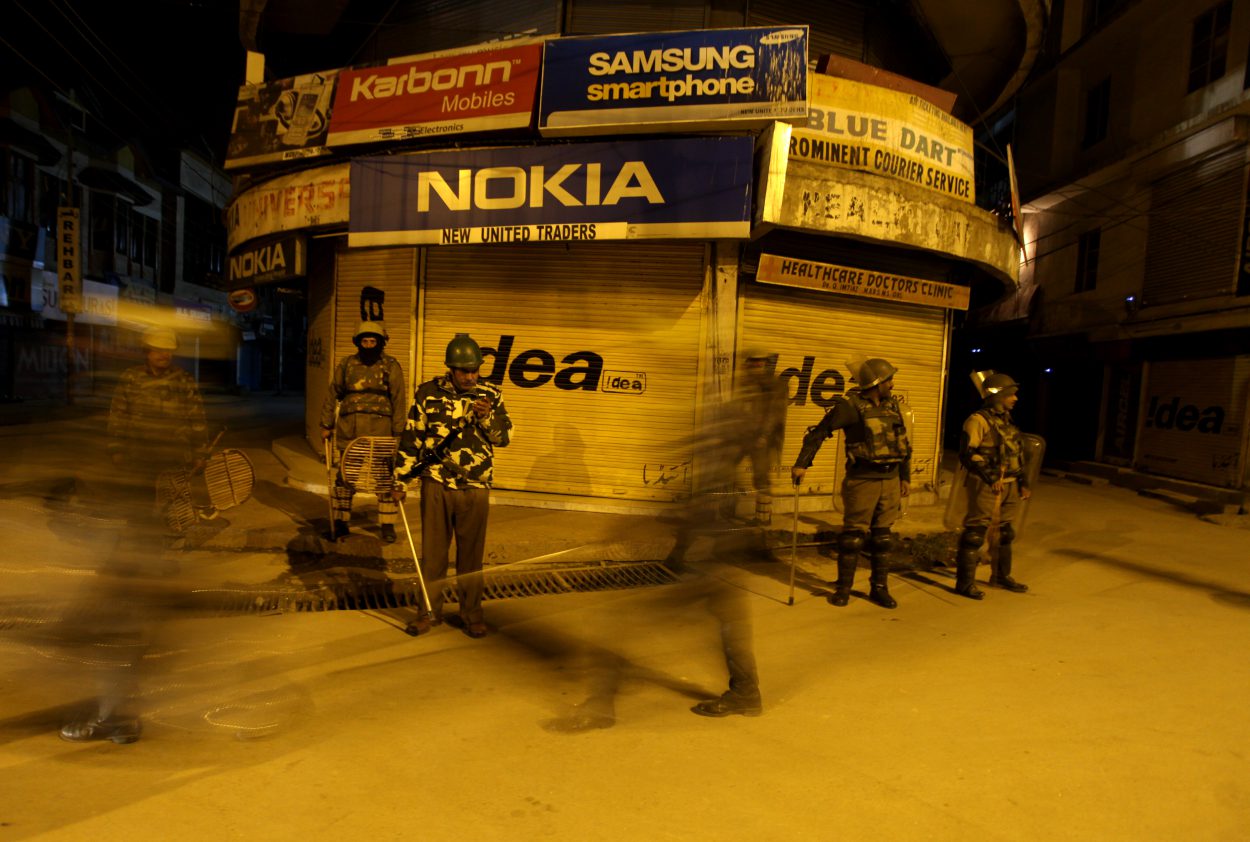 As an unelected, bureaucratic government in India-administered Kashmir starts granting Kashmiri domicile certificates to Indian citizens, the replacement of the Kashmiri people has begun.

Yesterday, Navin Choudhary, a civil services officer, became the first Indian in a batch of 25,000 people to be certified as a “domicile” of the disputed region of India-administered Kashmir. Born in the Indian state of Bihar and officially now identified as a domicile of the “union territory,” Choudhary has worked in the Jammu and Kashmir government for manyyears. It was a much expected development after a string of illegal and unconstitutional changes imposed by the Indian state upon what was until last year a semi-autonomous state.

Last year after India unilaterally abrogated the partial autonomy of the part of Kashmir it administers, and effectively annexed the disputed region, the country’s prime minister, Narendra Modi, announced that he was going to work for a “Naya” (new) Jammu Kashmir. He was plagiarizing the reference to an emancipatory idea against feudalism, born even before India itself came into existence. Past months have established that Modi’s Naya Kashmir can only give Kashmiris disempowerment.

This disempowerment does not begin with Modi, but liberal Indians like to believe that a malaise worse than Covid-19 has gripped India and is causing a mutation in the country. A closer examination would reveal that Modi has not transformed India; he has merely unmasked it. The systematic dismantling of rights in Kashmir isn’t recent. The domination and degradation of Kashmiris has always been greeted with festive celebration by Indians, underscoring that Modi did not make India; rather it’s the other way around. Modi’s appropriation of Naya Kashmir, a seminal moment in Kashmir’s history, intends only to add insult to injury. But it doesn’t stop there.

Last month Kashmir’s unelected, bureaucratic government notified the procedural rules for grant of Kashmiri domicile certificates with provisions to grant these to Indian citizens. Now, the replacement of the Kashmiri people has begun. Creating new classes of “legally recognised Kashmiris”—naya Kashmiris, if one may. Under the new rules, the children of these “Kashmiris” can be recognised as Kashmiri domiciles even if they have never lived in Kashmir. At the same time, ethnic Kashmiris who fled Kashmir to escape massacres have no right of return anymore since the Jammu and Kashmir Grant of Permit for Resettlement Act, 1982 stands repealed.

Taking their cue from Modi, India’s Hindu supremacists have renewed their call for “one nation, one people, one culture.” The new domicile rules in Kashmir are part of this project of homogeneity aimed at eventually yielding a singular, homogeneous group of people, with singular grievances and aspirations. Those who do not share these grievances and aspirations are not part of this homogenous group and are therefore the “others” who do not belong. Over the last 72 years, Kashmiris have been regularly reminded of their collective otherness.

In British India, the princely states were not under direct British rule. They enjoyed autonomy and had a local ruler. Jammu and Kashmir was the largest among these states and before its accession to India its Dogra Hindu ruler, Maharaja Hari Singh, made all law for the region. In 1927, he had passed the “state-subject notification,” granting certain privileges to those who qualified as state-subjects. After the accession, under questionable circumstances, Kashmiris, once the state-subjects of a sovereign entity, were made “permanent residents” of an autonomous state under Indian administration, pending a plebiscite. Now, Kashmiris have been made “domiciles” of a union territory under New Delhi’s direct rule, without their consent. The latest changes to the residency laws are an erasure of Kashmir’s history as a princely state independent of India—a project in creating homogeneity so there is no legal difference between a Kashmiri and an Indian citizen.

Much like India’s Citizenship Amendment Act (CAA), which effectively excludes Indian Muslims from citizenship rights, the domicile rules in Kashmir will adversely affect the vulnerable sections of Kashmir’s indigenous population—nomadic tribes, people affected by natural calamities, etc—who may not have access to the documentation sought to be recognised as domiciles under the new rules. The domicile certificate has been made mandatory for employment and education in Jammu and Kashmir. This puts Kashmir’s indigenous population at risk of dispossession, unemployment and eventual displacement if, either by manipulation or by design, they do not meet the new documentary criteria of domicile. Such transfers of population may qualify as a war crime under the Rome Statute of the International Criminal Court as well as a grave breach of the Fourth Geneva Convention.

The designation of domicile is a recognition of being a permanent resident in a jurisdiction. Jammu and Kashmir’s permanent resident certificate already establishes this statutory test for residence. It makes no sense to ask people already recognised as permanent residents to now obtain a certificate of domicile. It appears to be a circular exercise of re-verification of permanent residents in many ways similar to India’s controversial National Register of Citizens (NRC) and CAA exercise which has already seen hundreds of thousands of people being rendered stateless after failing to satisfy the criteria for documentation. This is not because they are illegal residents. Most have lived in India for decades and many were even born in India. But for the most destitute and vulnerable, the homeless and the millions living in starvation, to even own the documents necessary to prove their citizenship is too onerous a requirement.

The historical background to the need to make a distinction between permanent and non-permanent residents can be traced back to a decades-long agitation by Kashmiri pandits (Hindus) against the hiring of Punjabis in the state administration, which eventually led to the 1927 law promulgated by Hari Singh. It sought to provide certain privileges to permanent residents, especially in the purchase of land and employment in the princely state. The protection was mostly intended for non-Muslims of the region because Muslims were not part of the popular imagination of reform. The Dogras had essentially built a Hindu state where the nature of governance and reform were predominantly Brahmanical.

When the constitution of Jammu and Kashmir was passed, Part III Section 6 retained the power to define permanent residents with the state. It is important to note that the constituent assembly of Jammu and Kashmir was not set up by a sanction of the Indian constitution or the government of India. It was set up by the state itself acting independently of both, under the Maharaja’s Proclamation of 1 May 1951 on the advice of Sheikh Mohammed Abdullah, Kashmir’s first prime minister.

There is no provision in the Indian constitution under which the constitution of Jammu and Kashmir can cease to exist except with the consent and concurrence of the constituent assembly of the state. Legally, therefore, Section 6 will apply even if Article 35A of the Indian constitution ceases to exist because Section 6 does not derive its validity from Article 35A. (Like Article 370, which afforded Kashmir its partial autonomy, Article 35A is the representative of an agreement between the governments of Kashmir and India. Article 370 was the result of the Instrument of Accession and Article 35A represents the Delhi Agreement.)

Whether it is Nehru’s India or Vajpayee’s, there has always been a slow-burning offensive against Kashmiris. Under Modi, it has been funnelled into a virulent anger to strip Kashmiris of the rights they earned after decades of struggle against feudalism. Modi’s opportunistic authoritarianism, of exploiting the Covid-19 pandemic to enact legislative changes in Kashmir’s domicile law denies Kashmiris even the right to protest against this legislative change. It drives home the message to the people of Kashmir that nothing, not even a pandemic, can prevent the Indian state from doing what it wants to do with them. India’s priorities are especially pronounced when this change is made during an unprecedented economic crisis, when the acute plight of exhausted and starving migrant labourers has given Indian apathy its crowning hour of disgrace.

In 1952 when India attempted to expand beyond what was agreed upon in the instrument of accession, Abdullah threatened to resign from the constituent assembly, and called the idea of integration with India as “unrealistic, childish and savouring of lunacy.” He was dismissed and jailed just the following year. Over the next decade, Nehru realised there was no way of forcing integration and released Abdullah from jail. Nehru, however, died soon after. Instead of learning from Nehru’s misadventure, successive Indian leaders have spent the last seven decades gradually “integrating” Kashmir further, embellishing their own actions to forcibly realise a still-born objective even as Abdullah, too, eventually embraced what he once termed lunacy. Meanwhile, Kashmir’s defiant resistance has neither dissipated, nor died. What will it take for Modi’snaya Kashmiris to realise what Nehru did back in 1964?