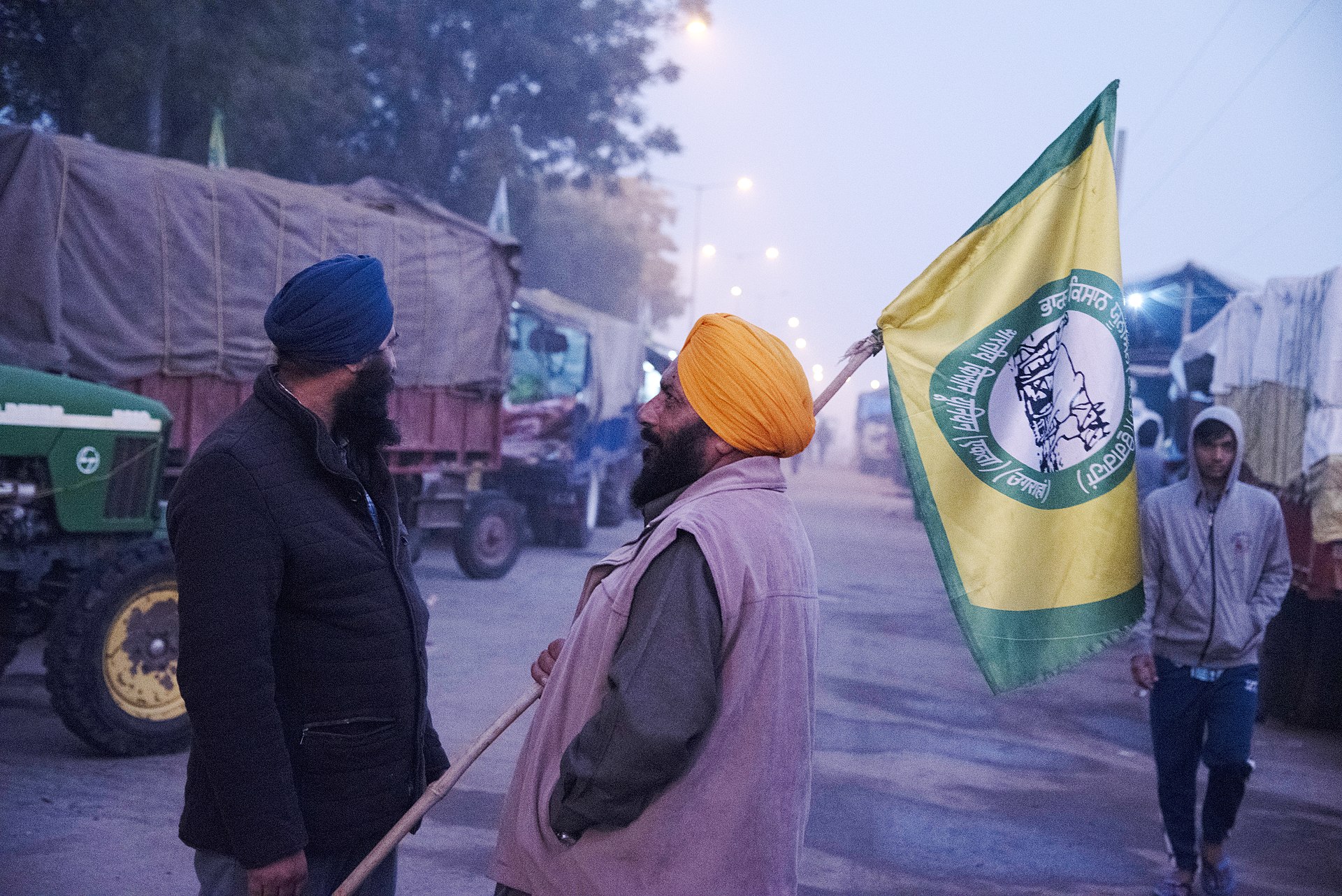 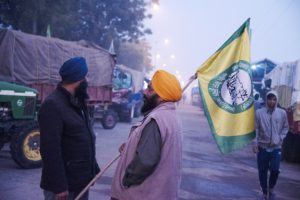 5 June 2020 marked one year since the three Farm Bills were promulgated by the Indian Government. On 20 September 2020, The Farm Bills were passed in a haste in the Rajya Sabha, the upper house of the Indian Parliament, by a voice vote. Opposition parties and farmers’ unions protested the decision since the aim of the Bill is to push the agricultural sector in India from a government-run to a private-run sector.

The Indian Government’s actions set off one of the largest and longest ongoing protests against the State since the Bharatiya Janata Party (BJP)-led government came to power in 2014. Farmers’ unions have strongly opposed these Bills and demanded their complete revocation.

Farmers have occupied key sites around the capital city of New Delhi for over 7 months. They have organized peaceful marches and contestations across the country. The State has resorted to tactics of repression and violence to counter the protests. First Information Reports (FIRs) have been filed against those who have reported on the protests and the Police have arrested journalists, labor union representatives and farmers. Police brutality and custodial violence have been routinely used against the protesting farmers and against those who have been arrested. Many farmers have died by suicide or as a result of other causes during the protests, while others continue to languish in jails. Yet, the farmers are relentless in their struggle against the Government’s push for the free market to dominate an essential but already struggling sector in India.

With A year of farmers’ protest: June 2020 – June 2021, Watch the State at The Polis Project aims to highlight the farmers’ struggle and their undeterred resistance during this year-long period.

5 June 2020 || The Indian government promulgates three Farm Bills: The Farmer’s (Empowerment and Protection) Agreement on Price Assurance and Farm Services Act, 2020; the Farmers’ Produce Trade and Commerce (Promotion and Facilitation) Bill, 2020; and the Essential Commodities (Amendment) Bill, 2020. These three Bills push the agricultural sector in India from a Government-run to a private-run sector.

24 September 2020 || Farmers in Punjab announce a three-day rail roko (a protest that involves obstructing the road or railway lines) agitation.

25 September 2020 || Farmers across India take to the streets in response to a call by the All India Kisan Sangharsh Coordination Committee (AIKSCC).

27 September 2020 || Farm Bills are given presidential assent and notified in the Gazette of India and become Farm Laws.

25 November 2020 || Delhi Chalo movement led by farmers in Punjab and Haryana is announced.

27 November 2020 || Farmers set up camps on the highways along Delhi’s border instead of the assigned site in Delhi’s Burai. || Over 20,000 female protestors arrive near Tikri border led by Harindher Bindhu, President of BKU women’s wing.

28 November 2020 || Amit Shah offers to hold talks with farmers once they vacate Delhi’s borders and move to the designated protest site in Burai. Farmers refuse Shah’s offer and decide to hold protests at Delhi’s Jantar Mantar.

29 November 2020 || At least three people have lost their lives since the 26 November protest.

1 December 2020 || Government holds talks with leaders of farmers’ unions and offers to set up a committee to look into issues raised against the Farm Laws. Farmers’ leaders reject the offer.

9 December 2020 || Farmers’ unions call for a boycott of Adani and Ambani products.

16 December 2020 || The Supreme Court of India proposes creating a committee with both representatives of farmers’ organizations and the Government.

30 December 2020 || Another round of talks between farmers and the Government takes place.

4 January 2021 || Reliance Industries says they have nothing to do with Farm Laws and plans to file a petition against the vilification campaign.

12 January 2021 || The Supreme Court suspends Farm Laws and sets up a four-member committee on its own. || Nodeep Kaur, a Dalit labor rights activist, is arrested by Haryana Police from the Singhu border.

15 January 2021 || The 9th round of talks between the farmers and the Government fails.

20 January 2021 || The Government proposes suspending Farm Laws for one and a half years. Farmers reject the proposal and demand the complete withdrawal of the Laws.

23 January 2021 || Delhi Police grants permission for a tractor parade on Republic Day. || Labor rights activist Shiv Kumar is arrested and booked on charges of “extortion and attempt to murder” in connection with a dispute related to factory workers.

29 January 2021 || The Police file sedition cases against six journalists and Congress leader Shashi Tharoor || Video of farmers union’s leader Rakesh Tikait crying at the Ghazipur Border goes viral and the protests, which lulled after the violence on Republic Day, regain momentum as thousands from western Uttar Pradesh join in.

30 January 2021 || Farmers hold a day-long fast on Gandhi’s death anniversary. || Union Home Ministry suspends internet at Singhu, Ghazipur and Tikri borders and nearby areas till 31 January. || 38 FIRs are registered and a total of 84 people are arrested over tractor parade violence on 26 January. || Mandeep Punia, freelance journalist, is arrested from Singhu border and journalist Dharmendar Singh is detained by Delhi Police.

31 January 2021 || A FIR is filed against The Wire’s Siddharth Varadarajan for tweeting on Navreet Singh’s grandfather’s claim that he died from bullet wounds.

1 February 2021 || Delhi Police released a list of 122 people arrested from different parts of the city after the joint farmers’ front alleged that over 100 people who went missing were kept in illegal detention.

2 February 2021 || Journalist Mandeep Punia gets bail. || Journalist Ismat Ara and The Wire are added to the FIR against Siddharth Varadarajan. || Police construct barricades near protest sites.

3 February 2021 || Delhi Police prevent students and activists from marching in support of protesting farmers. || Section 144 is put in place as the march from Mandi House to Jantar Mantar takes off. || The Ministry of External Affairs (MEA) defends Farm Laws amid international backlash. The Government adds hashtags #IndiaTogether and #IndiaAgainstPropaganda in its press release.

6 February 2021 || A Chakka Jam (blockading a road to intentionally create a traffic jam as a form of protest) is conducted by protesting farmers.

7 February 2021 || Karamveer Singh, a 52 year old farmer from Haryana, dies by suicide near the Tikri border.

9 February 2021 || Actor Deep Sidhu is sent to a seven-day police custody to investigate his links to the violence at Red Fort on Republic Day (26 January) in Delhi.

19 February 2021 || Delhi Police has arrested a total of 149 people in relation to the Farmer’s protests.

26 February 2021 || Labor rights activist Nodeep Kaur is granted bail in the third case against her and released from jail.

4 March 2021 || Activist Shiv Kumar is released from jail after being granted bail in three cases.

8 March 2021 || Gunshots are fired near the Singhu border protest site. Nobody is injured.

9 March 2021 || The Enforcement Directorate raids the house of Punjab Member of Legislative Assembly (MLA) Sukhpal Khaira who opposes Farm Laws and raises the case of Navreet Singh, a farmer who died during a tractor rally against the Farm Laws on 26 January.

13 March 2021 || Police register cases against farmers under various sections for digging up borewells on the highway and building concrete structures.

24 March 2021 || A FIR is filed against Rakesh Tikait for his speech asking farmers to intensify their movement and “turn Bengaluru into another Delhi.”

2 April 2021 || Around 500 farmers carried black flags to protest against the Haryana Deputy Chief Minister, Dushyant Chautala, and the Haryana State Government. This forced Chautala to fly eight kilometers from Hisar airport to avoid the protestors and the roadblocks.

2 May 2021 || Farmers celebrate BJP’s defeat in the West Bengal elections. || Farmer Rakesh Tikait and 12 others are booked for allegedly violating prohibitory orders and holding a mahapanchayat (massive gathering) in Haryana.

8 May 2021|| Farmers in Punjab march against the lockdown restrictions, urging traders and businesses to keep their shops open.

27 May 2021 || Farmers observe a “Black Day” across the country to mark six-months of protests against the Farm Laws.

28 May 2021|| Protesting farmers announce a “Defeat BJP: Mission Uttar Pradesh” campaign ahead of the 2022 Assembly elections in the state of Uttar Pradesh.

5 June 2021|| More than 470 farmers died during the year-long protest against Farm Laws.

7 June 2021|| Farmers stage a sit-in at Tohana Police Station after the administration refused to withdraw cases against two farmers’ leaders jailed for protesting outside the residence of Devender Babli, a Jannayak Janata Party’s Member of Legislative Assembly.

26 June 2021 || Farmers march to Delhi to mark seven months of protest against the farm laws.

27 June 2021 || Samyukt Kisan Morcha (SKM) demanded the withdrawal of cases registered against farmers during their protest marches on 26 June to mark seven months of the agitation.

BY Watch the State

Patterns of violence against journalists in India