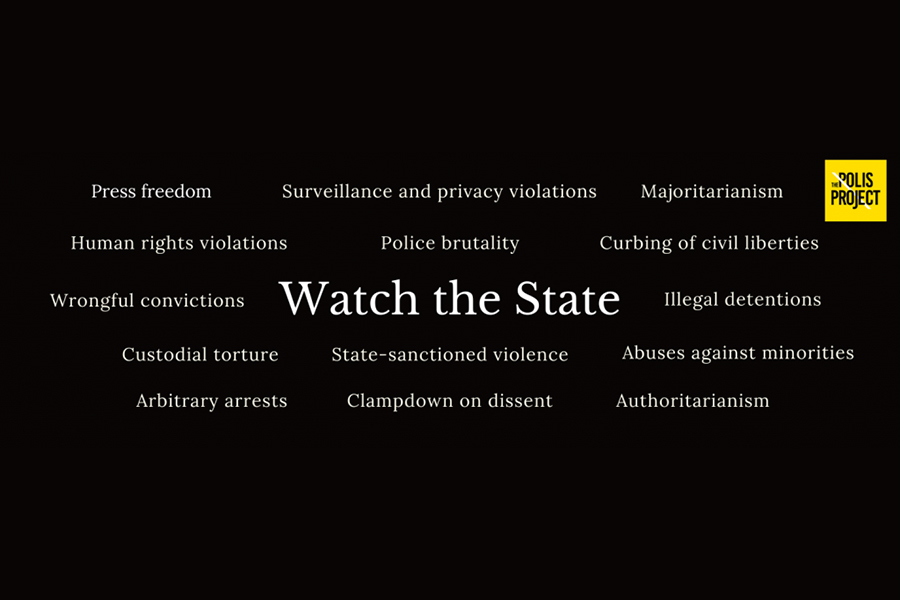 Kill us, we will become ghosts

And write of your killings, with all the evidence

You write jokes in court,

We will write ‘justice’ on the walls

We will speak so loudly that even the deaf will hear

We will write so clearly that even the blind will read

You write injustice on earth

We will write revolution in the sky

Everything will be remembered,

Set up by The Polis Project, Watch the State (WTS) documents, analyzes and aims to understand state violence.

As a politically organized administrative apparatus, the State exercises political authority and decisions over a population within a clearly demarcated territory. Our project looks at instances of violence inflicted by the State on its citizens through state actors. These acts of violence are the result of both the State’s direct actions and its inaction and also include the support or consensus for acts of violence by the state machinery and institutional political actors.

WTS was set up when the first protests against the new Citizenship Amendment Act (CAA) broke out in India in December 2019. Student protesters approached The Polis Project asking for support in tracking the growing police violence against citizens. The Polis Project then set up a system to document instances of unprecedented state violence against protestors, which included illegal detention and custodial torture, the use of tear gas, surveillance, police brutality and hate speech.

WTS aims to hold the State and the people in power accountable by creating a repository of state violence and maintaining public and institutional memory. WTS has also developed a system of analysis to understand and combat state violence.

To this end, WTS focuses on:

Fueled by a majoritarian right-wing ideology, the Indian State has created a political atmosphere where violence against dissenting citizens and discrimination based on religion, class and caste has become the norm. The consistent and brutal attacks against minorities, protesters and all those who speak out against state repression has resulted in India being on the watchlist of every international freedom index and human rights watchdog.

The State, however, maintains a monopoly over violence and continues to perpetrate it with impunity. Those who question the Government are branded “anti-national;” a compromised judiciary fails to protect the rights of citizens; and a biased media uncritically reports the Government’s version of the truth.

WTS aims to understand what constitutes state violence and how violence and impunity have expanded by looking at the physical, structural and symbolic dimensions of violence and its various social, political and economic manifestations.

Since its inception, the project has grown organically in its themes, agenda and scope to include diverse forms of state violence.

By documenting instances of state violence, WTS continues to look at:

The initial questions that defined our methodology were:

WTS collates specific examples, news reports and verified videos with source attribution; we collect instances of violence not covered in the mainstream media, but gathered by credible, non-partisan and independent journalists, newspapers and digital news media outlets. We gather information through social media platforms such as Twitter and Instagram and through communication with other researchers, journalists, grassroots activists and social workers. We continue to identify various national and regional newspapers and digital portals as well as news by community-based journalists as sources of information and cross-check all reported instances for verification.

In India Saab Yaad Rakha Jayega (Everything will be remembered), a poem written by Aamir Aziz, gained national significance during the anti-CAA protests and continues to be an important reminder of the State’s vicious attacks on its citizens. The purpose of WTS is to hold the State accountable by documenting and producing research that questions exploitative hierarchies and systems. The process of documenting state violence is an effort towards remembering each instance of violence while also viewing it in relation to larger patterns and manifestations of state violence globally. Through WTS, we aim to remain alert and transform the ways in which we understand state violence.

The above essay
is a part of
Manifesto
Share