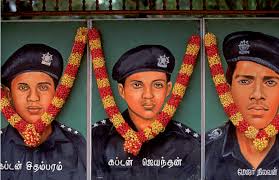 ‘ They are systematically erasing the identity of the Tamils, because our identity is not only linked to the language and the history, but it is also linked to the homeland.’ – Podcast with Nitharsan

In this episode of the Polis Project’s Podcast series Suchitra Vijayan speaks to Nitharsan, the coordinator of Puradsi Media, who is part of the collective that edited and published “Structures of Tamil Eelam”, a book that documents how the de–facto Tamil State was built and run during the long years of fight against the Sri Lankan government. The book is a collection of texts and rare photographs that are no longer available in the Tamil homeland, and it documents the various legal, political and administrative structures that existed throughout the decades in the Northeast. The book through these rare images makes the argument that LTTE built and ran a de-facto state. The conversation discusses the Sri Lankan state’s efforts to re-write history, militarization since 2009, online censorship, and what it means to talk about Tamil sovereignty, ten years after the war.

Suchitra Vijayan: I would like to start by asking how and why this book came together?

Nitharsan: I think you all know that in 2009 the war ended in  Sri Lanka and a lot of Tamils were killed. Our state was crushed and we in the diaspora, especially the youths, we witnessed this war, and we were all doing protests everywhere, but we couldn’t stop the war. So, after 2009 my friends and I started collecting materials about our struggles, about the state and there we archived a lot of photos and documents about the Tamil state. After seven years in the year of 2017, we started to release these photos and were giving information about it, especially on social media, on Instagram and Facebook. But a lot of the material that is related to the Tamil struggle was being deleted everywhere from social media. Our Facebook got banned in the year of 2018. After this incident, we sat together, and we decided that we would not accept that. So we created the indestructible material, we wrote it down as a book. And this book was released this year on the 19th of May.

You also timed it to coincide with one of the worst massacres and genocide that happened to the Tamil people.

Yes, it was on the tenth anniversary of the destruction of the Tamil state, and we thought if we release it at this point, we will gather a lot of attention and yes, we were successful.

The book means that there is a visual archive … and it destroys the argument that is often made by the Sri Lankan state, that the Eelam movement was simply just a movement, it was not a state.

And one of the sentences that jumped to me in the book was — “clouding the collective memory of a revolutionary institution.” Can you tell us how the Sri Lankan state is remaking the history of Tamil struggle?

Yes, after the war ended especially, they started to erase all the memories that are connected with our struggle. They destroyed the cemeteries of our fallen soldiers. They destroyed a lot of statues, and on the other side they started to build their own war memorial, especially, in Kilinochchi, that is the famous one. They are running pre-schools in our homeland, and this pre-school that is run by the army is indoctrinating the young children. Before the class starts, they have to stand before the Sri Lankan flag and sing the national song.. And also, they are always surrounded by soldiers. And they get the impressions that all the soldiers are heroes and they are hiding the fact that these soldiers have destroyed our state and have killed a lot of people.

There is also another way of erasing memory. One that you actually spoke about earlier, about how when you first started putting out your images on social media platforms, you actually got banned. So, the reach of this collective erasure of memory is beyond the borders of the Sri Lankan state.

A: Yes, you are very correct. And in this point, we have also have to admit that it’s not only the Sri Lankan state that is behind it. The Sri Lankan state will need help, and they are getting this help. But right now, it’s very systematic, and they are targeting a lot of activists, who got banned. Or they are going a step further and attacking them on the personal level. I think you know, you heard about the case of Thusiyan Nandakumar who gave an interview on the BBC. He got brutally abused on social media and also his family. They are also erasing the memory, and they are threatening the people who are standing for this memory.

Let’s talk about the last ten years and the very real effects that it has had on the Tamil struggle for a homeland.

Yes, in the last ten years there were, there happened a lot of changes. When you are talking about the homeland, a lot of our lands are being grabbed by the military and the military is using this land for their own purpose or they are colonizing it with, with Sinhala people. And this is affecting our community in a very broad context. First, it is their land, and if they are losing the land, they are losing their economy. And also, they are systematically erasing the identity of the Tamils, because our identity is not only linked to the language and the history, but it is also linked to the homeland, where we are living. But if you are colonizing it with other people who are changing the demography, especially in some examples, they are renaming the whole villages. It has a great impact on the whole society. And also, a lot of the activists are being threatened. There are a lot of cases, I think, before a month some students got arrested because they, found some military boots in the university and all these things are continuing, and it is getting worse.

In the last ten years do you feel that there has been a reimagining of Tamil sovereignty?

Tragically, yes. We as the phoenix, the next-generation, in our opinion Tamil sovereignty is pure doctrine, you can’t change it because in 2009 when the war ended, the movement of the armed struggle made it clear to everybody that they won’t give up their ideology. They will rather die than to give it up. But right now, we see some of the political leaders in our homeland or even in the diaspora they are changing this ideology. They start, how to say that, making compromises.

How do you see the current imaginations of Tamil sovereignty? And how do you think this trajectory should go?

This is not correct because we have democratic mandates for Tamil sovereignty. In 1976 there was a resolution passed that is called Vaddukodai, where all the Tamil parties gathered and put the demand for a separate state. And this got the democratic mandate of the people in the next year, 1977. We have a democratic mandate that the Tamil people want a separate state. And we have to say that we established a state in the following thirty years. That is what you are witnessing in the book, Structures of Tamil Eelam. The state getting destroyed is not the reason that we can’t go back and try to find a solution or justice in the state of Sri Lanka.

The visuals in the book are powerful. But what is interesting about the book itself is how the de-facto Tamil state was truly ahead of its time. Can you perhaps talk about certain aspects that you think showcases how the state created ideas and policies that were much ahead of its time?

And also, the rights of the women were very ahead of the time because, in the year of 1994, they defined what is rape. They said, if you have sexual relations with a woman against her wish, it’s rape and also if you don’t have her approval, it’s also rape. And if you look on the so-called, humanistic states or on the or the countries that call themselves developed, like the European states. Sweden has, defined rape as to have sex without approval only in the year 2018 and 40 years after our state. And also, in the German Parliament, there was a debate about this, and the parliamentarian makes jokes about how they will have sex when this law is implemented. Should they have to sign a contract every time they have to sleep with a woman? And this is for me the point where I thought okay, we were ahead of our time.

And also, if you look to these law books, they defined everything. The rights of the workers were defined. They can work a maximum of nine, nine hours per day, and 45 hours per week. The minimum of salary was established and also the pregnancy vacation was defined in the laws and for me in the context of South Asia and even internationally it was ahead of its time. The participation of the women in the daily life was great because, in the bank of Tamil Eelam, 80% of the workers were women and also transgender people were working there, and this is, yeah, something I haven’t seen anywhere in, in the world.

Why do you think these ideas were already incorporated even when the de-facto state was being built?

In my opinion, they had to do that because there was an external enemy. The Sir Lankan state and their imperialistic allies that were threatening the Tamils. So, they had to form a unity, and this unity was only possible if there was an egalitarian society. So, they were forced to, or the whole community was forced to do that. And only if you form this secular, socialistic egalitarian society, you are able to protect yourself against this mighty state.

How do you think the work that you are doing to counter to the hegemonic history writing by the Sri Lankan state will play out. So now you have this book, but how do we make something like this travel? There is a massive discrepancy of power of resources. So how do you imagine this work traveling?

What we have imagined with this work is that this book is only a starting point because I think in the book it is written that we have only collected a small portion of everything and with this, we tried to motivate all the people to do the same. They should start their own research and they should, how to say that, write their own books or make their own movies about the state and about our struggle and so we should maximize, how to say that, these efforts. That is ours, so I think to collect and archive our memory should be done by everybody, not only by one organization.

The book ends with the call that the struggle continues. How do you see the imaginations of the Tamil Eelam play out? What, how does the struggle go forward?