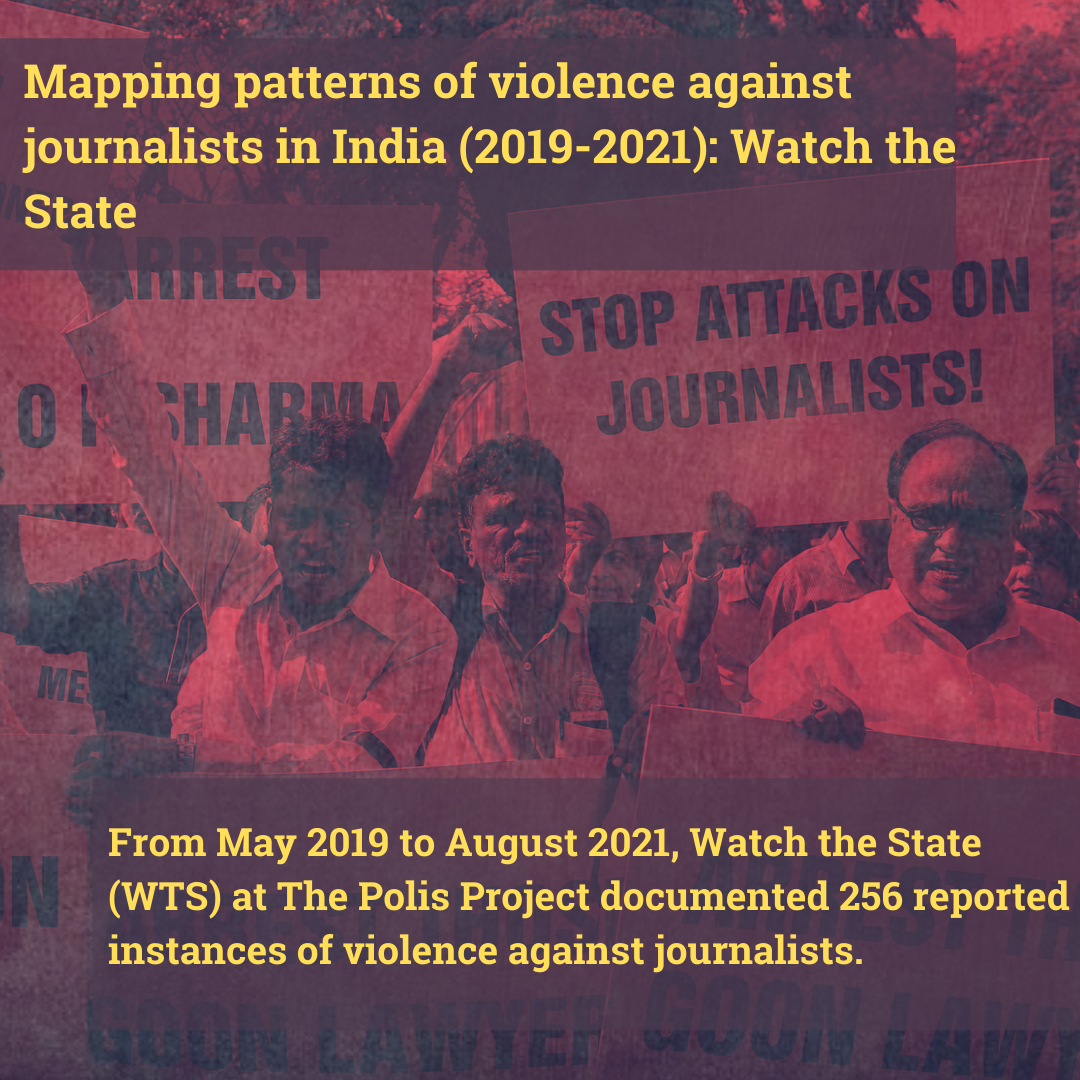 “As journalists, we are not strangers to threats and intimidation. Whenever we go out for a story, we anticipate some kind of violence and we analyze the risks and think about what could go wrong,” – Ismat Ara, Journalist based in India.

In Mapping patterns of violence against journalists in India, The Polis Project’s Watch the State recorded 256 instances of violence against journalists between May 2019 (which marks the beginning of the second term of the current government) and August 2021. According to Reporters Without Borders 2021 World Press Freedom Index, “Ever since the general elections in the spring of 2019, won overwhelmingly by Prime Minister Narendra Modi’s Bharatiya Janata Party (BJP), pressure has increased on the media to toe the Hindu nationalist government’s line.”

At Watch the State, we documented instances of violence against journalists under various categories. Of 256 instances, 26 were during the Anti-Citizenship Amendment Act (CAA) Protests; 46 related to COVID-19 reporting and the lockdowns; 19 during the Delhi pogrom in March 2020; 10 during the Farmers’ Protest in 2021; 51 in Jammu and Kashmir and 104 other.

We recorded details of each instance of violence including the name of the journalist, affiliation, date of event, nature of violence, political party in power in the state where the violence took place and reason for violence. Certain names appear more than once in the list because the same individual might have faced different instances of violence during different events. We have included the names of a few news organizations that have been targets of state violence as well as the names of reporters, photojournalists, camera persons including those who work independently. In certain cases, the individuals involved decided to maintain anonymity hence none of their identifying details have been included.

Data artist Rasagy Sharma designed the map that visualizes the collected data to convey the extent and distribution of the violence.

This is an ongoing project and the existing list is not comprehensive or exhaustive. There are instances where various forms of violence against journalists may have gone unreported and undocumented. We have collected data on reported instances of violence from English news and reports compiled by human rights organizations. News in Indian languages and from regional publications have not been included in this database.

Sources include: Committee Against Assaults on Journalists (CAAJ); ‘Silencing Journalists in India’ by Human Rights Law Network; the yearly reports of the Committee to Protect Journalists (CPJ), Reporters Sans Frontiers (RSF) and the International Federation of Journalists (IFJ), The ‘India: Media’s Crackdown During COVID-19 Lockdown’ by the Rights and Risks Analysis Group.

From the analysis of events and themes, it became evident that all these instances were part of a larger pattern of state violence. In the Farmers’ Protest, the Delhi pogrom and the anti- CAA protests, people were voicing their dissent against the policies and activities of the ruling dispensation. The State responded to such contestations and to those who documented it with unrestrained violence and repression.

From the analysis of the data collected, we found that:

During the COVID-19 pandemic in India, the Government tried to suppress the reporting of COVID-19 ground realities by forcing journalists to publish only pre-approved information. Those who tried to report on the ground reality faced violence and intimidation. Journalists who have been painstakingly reporting from the field and questioned the Government’s apathy and negligence were threatened and accused of spreading rumours about the public health crisis. FIRs, summons, physical attacks, threats and intimidation were some of the common patterns of violence against journalists who reported on issues related to the pandemic.

Journalists in Jammu and Kashmir have been subjected to various kinds of violence for doing their jobs. They have been grappling with the basic issues of personal safety and the right to report facts in the midst of a media blackout, a military siege and a pandemic. They are often subjected to physical assault at the hands of the Army and the Jammu and Kashmir Police, are regularly charged under draconian laws while authorities carry out systemic threats, intimidation, harassment, physical assault and gag orders.